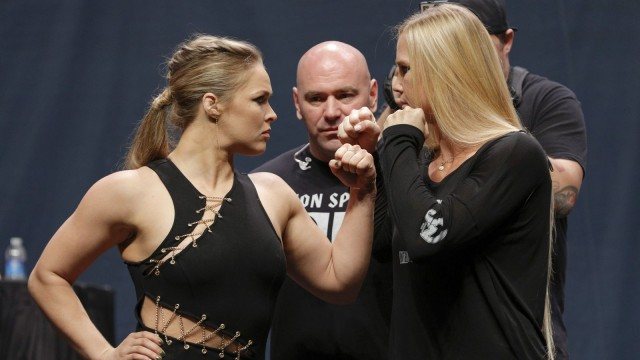 The Ronda Rousey v Holly Holm fight might have ended in near tragedy for the previously undefeated MMA fighter Rousey, and triumph for the former bantamweight boxer Holm, but the money ripples are going to be spreading for long after the bruises have healed.

The southpaw Holm dominated from the beginning of the fight held at Melbourne’s Etihad Stadium on November 15th.  At the end of the first five minute round an upset looked very much in the cards. Insiders say that Rousey’s coach told her the wrong stuff at the end of round one. Edmond Tarverdyan encouraged the previously unbeaten Rousey to believe that everything was even though Holm had without question dominated Rousey throughout the round. Tarverdyan sent Rousey back like a lamb to the slaughtered while trying to confront Holm’s scientific boxing abilities.  Fifty nine seconds into the second round, the inevitable happened; Rousey sleepwalked into a combination straight left and a kick to her head which resulted in the fight being stopped due to knockout and Rousey being unconscious for a brief spell.

After a big fight like this, one can’t help wonder about the financial ramifications.   So what about the money?  The attendance in Melbourne was a respectable fifty six thousand and change, and the gate topped six million dollars, but the real money was in the betting as well as future of both fighters.

The bookmakers took a serious knockout blow when the hotly tipped favorite at very short odds went down to the newcomer. A hundred dollar bet on Rousey would have netted you a princely five bucks had she won. Holm closed at 5 to 1, and the payout was serious. A hundred dollar bet would have earned you a payback of $600. The Holm management team are rumored to have won to the tune of six figures, and there is even talk of an individual who placed a $20,000 bet, for a $240,000 win – a nice payday for someone if it’s true. The big losers in this fight were not the Rousey camp, but the bookmakers who set disastrous odds and who simply didn’t see the huge upset coming.

The fighters were paid on radically different scales. Rousey is said to have netted some five million dollars in purse, sponsorship and bonuses from her last fight, and speculation is that the figure for this championship defense topped a cool ten million bucks. The contender on the other hand, was paid a paltry, by comparison, $65,000, just for turning up to fight, although this will be swollen to around $330,000 when all other income is taken into consideration, such as pay per view and of course, a bonus for her win, and for being involved in the fight of the night. The fighters also received $40,000 (Rousey) and $30,000 (Holm) from sports equipment sponsor Reebok.

There is absolutely going to be a rematch, unless the heavens fall in. A valuable fighting commodity like Rousey is not going to be allowed to just slink away and lick her wounds. Everybody wants to see the rematch, and the competitor that is Rousey is not going to want anything less than a chance for her revenge over the upstart Holm. Her first taste of defeat will be sour in her mouth, for certain, and one she will want to rinse out with the champagne of victory. The fans will want to see how she can train to meet the challenge of the left handed boxing expert Holm, and Holm herself is going to demand to show the world that this was not just a fluke result.

This isn’t going to happen any time soon, as both fighters, especially Rousey, will need time to regroup and recover (she has a six month suspension from the sport due to her injury).  Rousey and her management team will need to figure how she can meet the Holm threat, and Holm will need to develop some new weaponry if she is going to bring the element of surprise into the cage one more time.

There is a body of opinion which believes that Rousey will not want to fight Holm again, Jose Aldo being one of those who think Rousey will have lost her taste for battle as a result of the humiliating defeat, but that seems to be a minority view. On the other hand, there does seem to be something of a move into a different career for Rousey, acting, with a role in a remake of the classic Hollywood movie “Roadhouse” in the cards.

Holm, in interviews, has naturally taken a “Bring it on” attitude – she will be the big winner in any rematch, at least compared with the relatively paltry earnings from UFC93. Next time around, Holm is going to be asking for, and likely getting, a much bigger share of the purse. The likable lass from Albuquerque with her “Preacher’s daughter” image brings a certain degree of respectability to women’s MMA – a respectability which may draw in some interesting new sponsors. (Although Holm’s sponsorship by a company which has been linked to substances banned by WADA has somewhat cast a cloud over the fighter’s clean cut image). Of course Holm brings her UFC 193 triumph to the table to strongly back up her inevitable demand her fair share of the goodies.

The shock result has to some extent catapulted women’s UFC from out of the shadows, where it has lurked these past years, and into the spotlight where serious money can be made. Pay per view and sponsorship figures are likely to be stratospheric when the two fighters meet for the re-match.

So what is the sporting money going to look like next time? Well, Rousey is still the favorite to win the rematch, even though it hasn’t been announced, with oddsmaker Bovada currently offering Rousey at -175 (4/7) and Holm +145 (29/20). The bookmakers are not going to let anything go to their heads – when did they ever? Rousey has still only been defeated once in her career, and that hardly qualifies the fighter as a no hoper, simply on the back of that defeat.

The shattering defeat that Rousey suffered doesn’t seem to have rattled the Las Vegas sportsbooks as much as might be supposed; chances are they’ll set more profitable odds next time. After all, Las Vegas wasn’t built by winners.