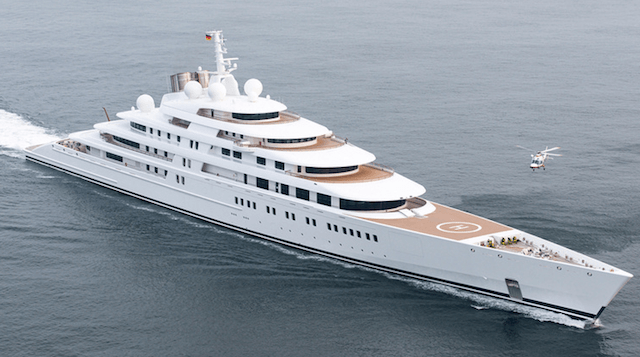 There are many different types of expensive vehicles in the world that are extremely exclusive like a Ferrari, for example, however supercars don’t come anywhere close to yachts. Sure a fast sports car like a Ferrari or Lamborghini is really impressive, but yachts are on a whole other level. It can easily cost around $5 million dollars to purchase, say a 60-foot yacht, and while that is very expensive it comes no where close to the cost of superyachts. These vehicles are essentially floating mansions outfitted with pretty much every luxury amenity you could imagine. They cost a fortune to maintain and they often need a crew of over 50 men to operate; these vehicles are truly reserved for the top 0.1% of individuals. So which yacht is the most expensive in the entire world? Well that would be the Azzam and it is easily the most incredible vehicle that has ever been produced. But how much did it cost? To get some perspective, we first need to take a look at the man that owns the Azzam: Khalifa bin Zayed Al Nahyan.

When you take a look at the most expensive yachts in the entire world, a large majority of them are owned by oil barons and royal family members from the Middle East. These people are some of the wealthiest people in the world who can virtually afford to own anything. Khalifa Al Nahyan would certainly be one of those individuals. From Abu Dhabi, Al Nahyan is not only part of the United Arab Emirates’ royal family, he is also their current President. Outside of his governmental roles, he is also the chairman of the Abu Dhabi Investment Authority which manages some $600 billion dollars in assets. His family has a combined net worth of around $150 billion dollars, and as an individual he is worth somewhere between $15 to $23 billion dollars. To say that Khalifa Al Nahyan is a wealthy individual is quite the understatement. So like many of his colleges, he also wanted to own a superyacht so he had the Azzam constructed. With a final price of $605 million dollars, it is the most expensive yacht that has ever been constructed. 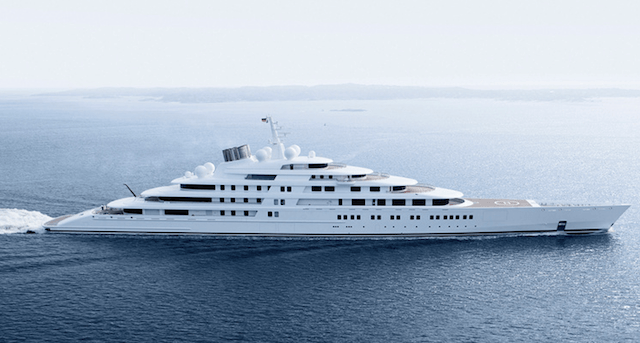 $605 million dollars is an absurdly large sum of money, heck its even larger than some countries entire gross domestic product, and all of it went to constructing a yacht. The Azzam not only has the bragging rights as the most expensive private yacht ever constructed, it is also the largest yacht of all time at 590-feet in length. A large group on people were employed to construct this yacht and it certainly took a great deal of time. The initial designs for the Azzam were created by Nauta Yachts and chief interior designer Christophe Leoni. After the plans were drawn up, they were handed over to the director of construction, Mr. Mubarak Saad al Ahbabi. He approached the German shipbuilding company known as Lürssen with the plans, and construction of the Azzam began sometime in 2010. It would take around three years for the yacht to be completed (a record breaking time frame), and it was finally launched in April of 2013. The completed project was quite the spectacle, to say the least.

The Azzam was constructed in such a way that it would feature a timeless design and that it could perform with relatively high levels of speed. The yacht measures in at 590.6-feet in length with a beam that measures out to be 68.2-feet. Now a yacht this size needs quite a lot of power, and it certainly does have more than enough power. The Azzam is powered by both two large gasoline engines and two diesel engines via four pump-jets. In total the Azzam boast around 94,000 horsepower under its “hood”, and it can easily reach speeds of 32 knots (36.8 mph).

A yacht this large and this powerful can certainly house a wide range of luxury amenities. Unfortunately since it is a private yacht, there isn’t a whole lot of information on what’s exactly on the inside. Still it’s fairly easy to speculate. We known there is a helipad, as yachts these large tend to have. Many yachts this large also hold small, personal submarines and I think it would be safe to assume that the Azzam has at least one since it already has a helicopter. From the outside, you can clearly spot at least six decks in total. The second largest yacht in the world, the Eclipse, needs a crew of about 70 to operate so the Azzam probably has a similar number. Still even with a crew that large there is plenty of room on board for things like a private theater, full kitchen, multiple bedrooms, a fitness center, and much more. While we don’t exactly know whats on the inside, the Azzam is definitely a floating mansion so you can let your imagination wander.

So with a price tag of a cool $605 million dollars, the Azzam is the most expensive yacht that has ever been constructed. While it is an amazing vehicle, many people are wondering how long it will hold down the top spot for the most expensive yacht of all time. It’s crazy to think that there could be a yacht bigger and more expensive than the Azzam, but I would bet that one will eventually be created. But for the time being, the Azzam is the king of all yachts and is definitely one of the most impressive vehicles that has ever been constructed. 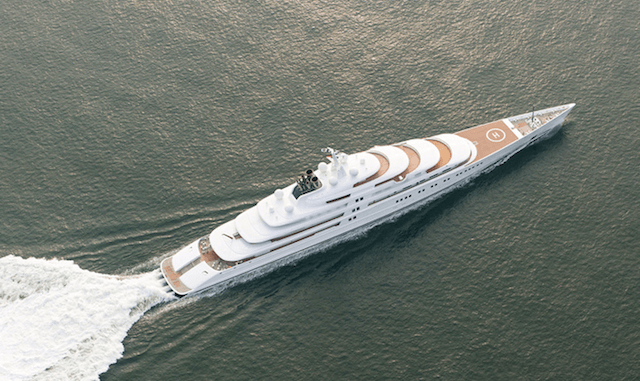