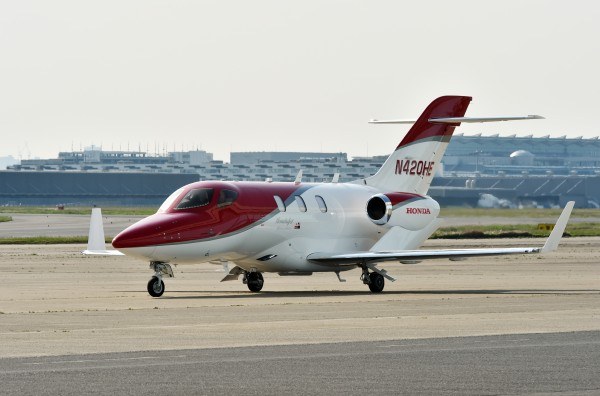 Honda is a company that gets recognized by most, if not all, people. They are one of the top car manufacturers in the world but have been seeking out other ways to branch into new industries. Now, the Japanese company has created its first private jet and will aim to target wealthy business flyers who are looking for a more secluded ride. Although this is new territory for Honda, it’s not surprising to see a car company begin to produce planes and other forms of transportation because it’s natural to them already.

The HondaJet has been in production for nearly 20 years and is finally ready to be shown to the world and open up Honda for new business in private air travel. The plane is painted red and white with a grey streak between the two and looks sleek but simple. It’s 42 feet in length and was built to have less air resistance through technology on the engine that allows it to sit atop the wings instead of the rear. This grants passengers a safer and smoother flight the entire trip.

The plane was unveiled at Tokyo’s downtown Haneda airport and will leave to go on a 30,000 mile world tour. During this adventure the jet will visit over a dozen countries around the world including places like Switzerland, Britain, France and Germany.

Honda has built the jet in a way that allows it to travel 2,000 kilometers without having to refuel and can travel between Los Angeles and Denver or London to Rome at speeds much faster than their competitors. Honda has been trying to break into this market for awhile now but needed to wait until their product was perfected. The new HondaJet is a very well-made aircraft and at only a $4.5 million pricetag, lots of people should consider it when in the market for a new private jet.