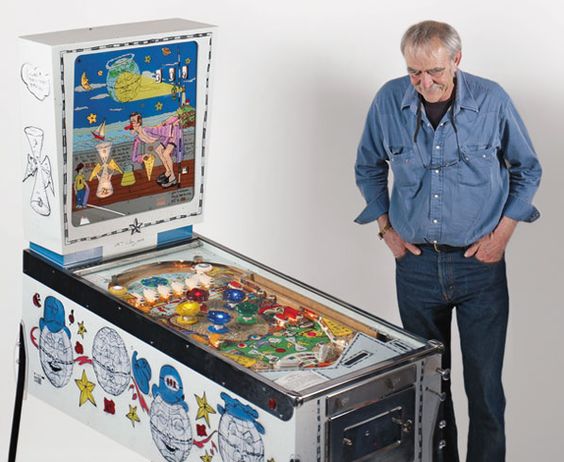 Pinball fans are more avid about this American pastime than one might expect. Their passion is revealed in forums about all aspects of the pursuit. Questions such as, “What’s the rarest game you’ve played?” or “What’s the most expensive pin sales of all time?” are answered by those who know their game best. So, when the latter question turned up on a Google forum, a rash of excitement prompted the following posted replies:

It’s obvious to the uninitiated that these players are extremely serious about pinball. It’s also obvious from the last forum post that pinball machine art in classic machines can be considered rare and valuable. This is where the relationship between pinball and art converges, and provides some very interesting details about Punball: Only One Earth…perhaps the most expensive pinball machine ever.

Why “perhaps”? A forum fan did post that he had been successful with selling two more pinball machines for more than the prices quoted above. He mentioned that he sold one to Joel Silver. He also neglected to mention the price, though another forum fan asked for clarification. Joel Silver, the legendary Hollywood producer of franchises such as The Matrix series, was gifted a pinball machine, completely custom-designed, complete with images and sounds from his career. The gift came from Richard Donner, who directed Lethal Weapon. It’s not clear if Silver was an avid collector of pinball machines, though. In secretive pinball dealer style, the details of machines sold are often left to the imagination.

But, Punball: Only One Earth is apparently one star in the world of classic pinball machines due to its artistry. Its story is intertwined with the heady world of art auctions. It also had a public showing at the Smithsonian Museum, and that is something huge.

In a January 19, 2010 column for McSweeney’s Publishing company, Mark Walters writes about his experience at a pinball lecture he attended at the Smithsonian American History Museum. David Silverman, pinball backglass art expert was the lecturer. Silverman had begun his collection of pinball machines when he was an art history grad student, sleeping under his Gottlieb Subway due to lack of apartment space. Silverman continued collecting, and eventually owned more than eight hundred machines. Nine of his collection were arranged in the museum atrium and set up for free play. Walters was impressed with the depth of knowledge Silverman displayed for artistry in the backglass of notable machines, but he was just as happy to play pinball with the rest of the crowd that day.

Silverman’s 867 pinball machines were collected over 30 years, and includes examples from the 1920s onward. When Walter attended the Smithsonian lecture in 2010, Silverman had dreams of establishing the National Pinball Museum to house his collection, which had been stored in a large building in his back yard. Silverman had been invited to the Smithsonian to give a talk about pinball machine art as part of the museum’s retrospective of the pinball art of William T. Wiley. Wiley created the artwork for Punball: Only One Earth. In fact, he opened the Smithsonian exhibit by playing pinball on Punball, which is now famous for its theme of global warming, and for Wiley’s imaginative and satirical artwork.

By 2011, Silverman had achieved his goal of creating the National Pinball Museum located in Washington D.C. His collection, featuring pinball design and construction through its various phases, filled the museum. But the museum lost its least, and moved to Baltimore. It lost its lease again, and by 2014, Silverman’s collection went up for auction, with sales set in series to be managed by Morphy’s Auctions. Because pinball machines are frequently themed to historic events or famous entertainers, the auction lots were divided into such groups as film-related, sports, history, and pop culture favorites such as Lucy and The Beatles.

The full story of Punball: Only One Earth rightfully begins with William T. Wiley, for he is the artist whose work distinguishes this pinball machine. He was born in 1937 in Indiana. He earned his BFA from the California School of Fine Arts in San Francisco in 1960, and his MFA in 1962. He was a faculty member of University of California, Davis, teaching art beginning in 1963. During that time, he was known for literary elements in his work; especially puns. His work has been exhibited around the world and exists in collections as diverse as the New York Museum of Modern Art and the Van Abbemuseum in the Netherlands. He is a major American artist whose works have appeared in the Corcoran Gallery of Art in Washington, D.C., the Venice Biennial, and the Los Angeles County Museum of Art, to name a few. He also includes in his credits; pinball machine.

Punball: Only One Earth began when Richard Lang of Electric Works Gallery approached his neighbor, Wiley, about designing a pinball machine. Wiley agreed. The type of machine was a North Star, so they stripped it down and Wiley began to think about what it would contain. He acknowledged that he wasn’t much of a pinball player when he was young. When given the opportunity to design one, he figured he would try it just to see what would happen. He learned that the world was filled with hundreds of people who play and many who collect the decorated machines with the devotion reserved for what many could call a cult.

When Wiley was interviewed by Abby Callard for Smithsonian Magazine, he noted in their 2009 interview that his inspiration for the drawings and theme of Punball came from several sources. His friend had brought notes about his social work by Chernobyl after the devastating nuclear facility leak. He began to illustrate examples to give information about it, using the artwork of Bosch and Bruegel, and then Duchamp, H.C. Westermann and Picasso’s Guernica. His impulse was to share ideas about how humans create their own horrors, and when asked what the key might be to understanding the messages he is attempting to convey, he responded, “Have empathy.”

What finally emerged on the redesigned North Star machine (a vintage Gottlieb), are what he views as a message about global warming. One example of the text written on the machine includes “the eye scabs are melting”, which is a reference to the melting ice caps. The side panels feature line drawings of the sun, moon, stars and Earth with faces, wearing caps depicting police from various countries and lines of text flowing along the sides. Sun, Moon, a skateboard, stars and other graphics in bold primary colors of red, blue and yellow fill the white background of the side panels and the backglass. The interior of the game is a bright mélange of orange, purple yellow, red, green and blue flippers and game parts.

Wiley decided to open the very first retrospective of 50 years of his artworks at the Smithsonian by playing pinball. The witty man who created the one of a kind pinball machine filled with wordplay and double meanings understands absurdity in the world. With Wiley, art, purpose and play are merged in Punball. Serendipitous for those who have had the chance to play Punball and see its intricacy. Art and pinball? Absolutely.