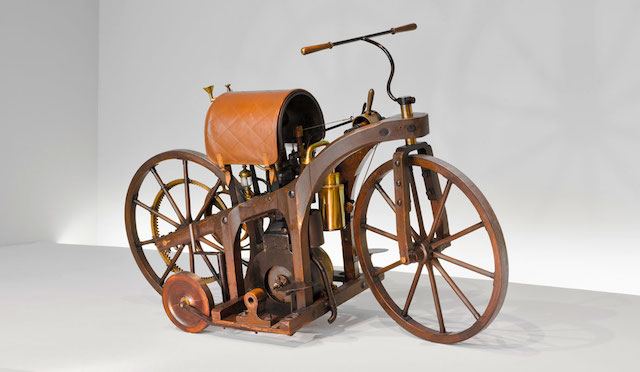 When you hear the word “Mercedes”, you probably instantly think of the finest luxury automobiles on the planet. Mercedes-Benz has established themselves over the years as an industry leader when it comes to all-things related to automobiles. However we don’t associate Mercedes with motorcycles, because they don’t make any motorcycles at all. However you may be surprised to learn that some original founders and engineers of Mercedes are not only accredited with the creation of the first gasoline powered car, they also created the modern motorcycle: the Daimler Reitwagen. So sit back as we are going to go back in history to take a look at the first motorcycle of all-time.

Back in the 1800’s during the height of the industrial revolution, the world saw a global change that impacted almost everything. Namely manufacturing and the harnessing of steam power and electricity allowed humans to create all sorts of different things that were previously unimaginable. Through the use of steam engines, trains and boats powered by these engines allowed us to travel more efficiently. However steam engines, as impressive as they were at the time, were inefficient and too large for the average consumer vehicle. While a massive train that was consistently being literally tons fed coal was feasible, an automobile-like vehicle was not. Soon various engineers started to apply steam engines to everything, but that all changed when internal, gasoline-powered combustion engines were created. Now everyone was trying to figure out how to go from point A to point B with a gasoline engine, but two men in particular were leading the race: Gottlieb Daimler and Wilhelm Maybach.

Daimler and Maybach were engineers, designers, and businessmen from Stuggart, Germany that had one vision: a world powered by internal combustion engines. Together, the two men joined forces and began working tirelessly to create all types of  designs for vehicles that were to be powered by gasoline engines. But back then, they had no idea just how significant their invention would be. 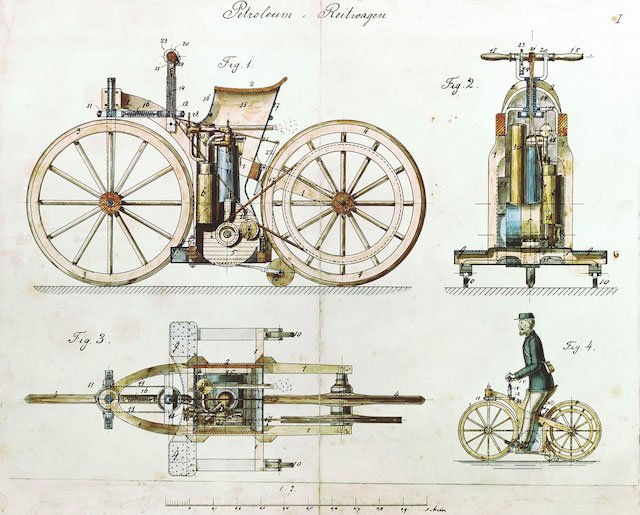 With the invention of the bicycle in the early parts of the 1800’s, the next logical step was to put an engine on it. The motorcycle was the ideal vehicle powered by an engine at the time. It was small, lightweight, and could easily accommodate a single rider. It also made sense that the motorcycle would be one of the first combustion vehicles, given their somewhat similar riding positions compared to horses. The smaller steam engines at the time were just too underpowered to propel a vehicle any larger. Bicycles and early motorcycles were often nicknamed “mechanical horses”, after all.  Throughout the later parts of the 1800’s, many steam powered bikes arose, but none were very successful. Gottlieb and Wilhelm began working on combustion engines, and eventually came up with a design known as the “Grandfather Clock”. Daimler and Maybach tinkered with this engine during the 1880’s, and in 1885 the two filed for a patient for a vehicle called the “Daimler Reitwagen”, or the Riding Car. 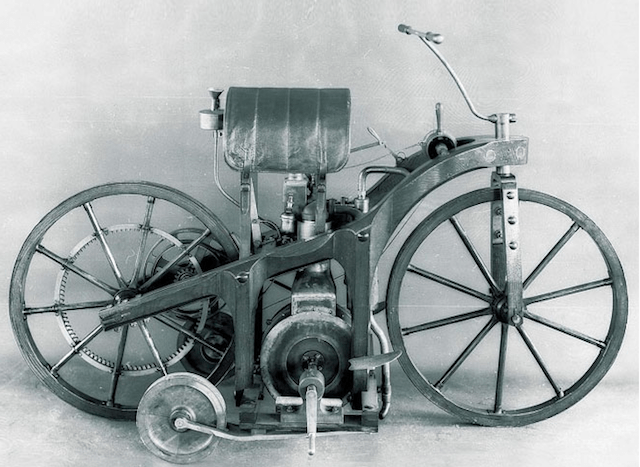 The Daimler Riding Car, aka the first Mercedes Motorcycle, was an early test vehicle for the internal combustion engine that Gottlieb and Wilhelm were working on. The two wanted to show the world that the gasoline engine was fit for day-to-day use by the average individual. They really wanted to set out to see how capable their engine was, not to create the motorcycle. Regardless, they came up with some designs and created this iconic vehicle.

The Daimler Riding Car featured a frame entirely made from wood, two main iron tread wooden wheels, two smaller support wheels, a simple leather seat, and rudimentary handlebars. But most importantly, at the heart of the vehicle was a 16cc, single-cylinder four-stroke engine that Daimler and Maybach created. That engine pumped out a total of 0.5 horsepower, allowing the nearly 200-pound vehicle to top out at speeds of 8 mph. By today’s standards, it was obviously nothing. But back then, this was the first gasoline powered motorcycle ever constructed.

Once the vehicle was completed, the two soon began to test it out. Gottlieb’s son, Paul Daimler, successfully road the Mercedes Motorcycle nearly 7.5-miles in Stuttgart in November of 1885. However due to the bikes design and placement of the ignition system directly underneath the seat, the motorcycles seat actually caught fire. Gottlieb and Wilhelm kept toying with their new vehicle, and in 1886 the added a two-speed transmission which proved to be more efficient.

However by that time, only one Daimler Riding Car was ever made and it never hit production. During the same year in 1886 the project was eventually ended. This was not because it was a failure, but rather it was a success. Gottlieb and Wilhelm proved to the world that combustion engines powered by gasoline were viable with the Daimler Riding Car. It was a prototype vehicle, and it completed everything it was set out to prove. The two would move on to brining their engines into four-wheeled vehicles, but as it still stands, the Daimler Reitwagen/Riding Car/Mercedes Motorcycle or whatever you want to call it, was the first motorcycle ever.

So in effect, the company that we now know as Mercedes can trace their roots to the production and creation of the first motorcycle. Sure it was extremely rudimentary, made from wood, uncomfortable, and was prone to catching fire, but it was still the first vehicle of its kind to do so. Gottlieb Diamler and Wilhelm Maybach brought the world the first combustion motorcycle which would lead to the creation of the first automobiles. Without the “Mercedes Motorcycle”, who knows how long we would have still been riding horses.