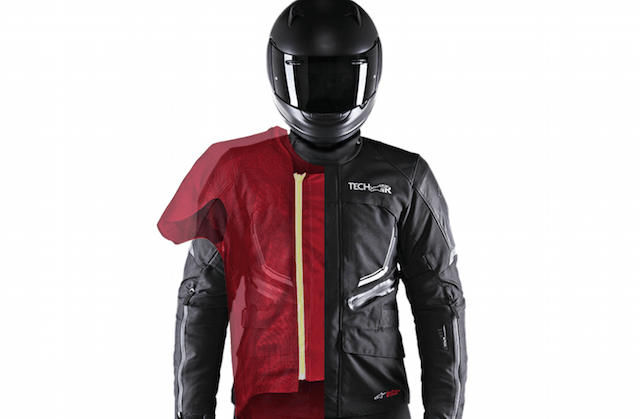 Those that own a motorcycle will tell you that not only is a bike a means of transportation (and probably one of the most enjoyable ones), but it’s also a lifestyle. Motorcycles are fun, affordable, and efficient but there are some drawbacks to owning one, obviously. The largest drawback is certainly safety. You could purchase thousands of dollars worth of the best protective motorcycle gear around, but an accident at 30mph can sill leave you extremely injured. In an attempt to protect the lives of motorcycle riders around the planet, BMW and Alpinestars have recently announced a partnership to develop a line of motorcycle gear that features built-in airbags.

Since motorcycles obviously don’t have airbags, the next logical step is to fit an airbag on the rider. BMW and Alpinestars are working together to achieve this. Their first product will be a jacket that features an airbag waistcoat that will deploy if a rider ever comes off the bike that protects a riders upper body, and it will be here sooner that you think.

Alpinestars already has developed a jacket very similar and they call it the Tech-Air Street Airbag System. It’s the first of its kind and is extremely easy to use. The current competition offers jackets that need to be plugged into the motorcycle or are only compatible with specific bikes. With the Tech-Air Jacket, you simply just put the jacket on and you’re good to go. The jacket has an LED display to let you know that it’s working correctly, and a built in computer system that can deploy the airbag 30 milliseconds after detecting an impact. For riders, this product is huge as it can save lives and reduce injuries incurred during accidents.

The BMW and Alpinestars version should be available sometime later this year, and it will feature the branding of both companies. I’m sure the two will come up with ways to further improve the jacket, and they eventually plan to release a series of similar products. There’s no information currently available on how much this jacket will cost, but I’d imagine it to be expensive. Still if a jacket that costs a few thousand dollars can save your life when riding, it certainly seems like a worthy investment to me.