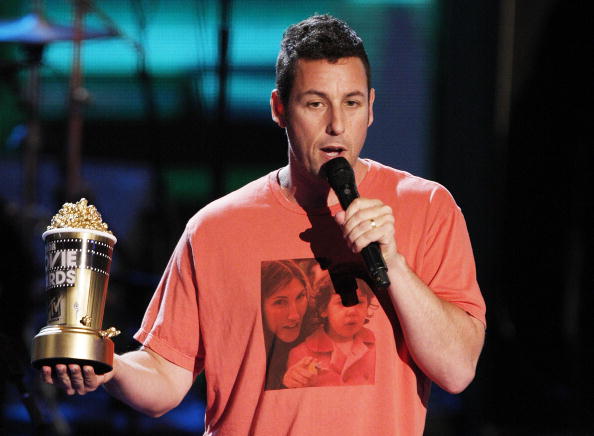 Adam Sandler is a well-known American actor, comedian, film producer, screenwriter, and musician who has starred in over 30 major motion pictures that combined, have grossed over $2.4 billion at the worldwide box office. After five seasons on Saturday Night Live, Sandler went on to star in numerous classic comedic films including Billy Madison (1995), Happy Gilmore (1996), The Wedding Singer (1998), The Waterboy (1998), Big Daddy (1999), and Mr. Deeds (2002). Sandler has also been known to take on more dramatic roles in films such as Punch-Drunk Love (2002), Spanglish (2004), Reign Over Me (2007), and Funny People (2009) and founded Happy Madison Productions in 1999, a film and television production company. Over the course of the New York-born actor’s 25-year film career, he has won five MTV Movie Awards and 12 Kids’ Choice Awards. Although a number of his recent films have received negative critical attention, Sandler maintains a net worth of $300 million–a number shared with the likes of Sean Connery, Bruce Springsteen, and Trey Parker and Matt Stone. Read on for a list of the highest-grossing Adam Sandler movies of all-time.

Big Daddy, released in 1999, is the oldest film on this list. A comedy film directed by Dennis Dugan starring Sandler and the Sprouse brothers, Big Daddy was Sandler’s last film before starting his production company, Happy Madison Productions. Sandler stars as Sonny Koufax, a bachelor who takes on the responsibility of caring for Julian, a 5-year-old boy played by the Sprouse twins. The film received generally positive reviews and opened at number-one at the box office.

Released in 2006, Click is a drama/comedy film directed by Frank Coraci, written by Steve Koren and Mark O’Keefe, and produced by Sandler, who also starred in the leading role. Sandler plays Michael Newman, an architect who acquires a universal remote that allows him to fast forward and pause his life, eventually leading to serious consequences. Click co-starts Kate Beckinsale and Christopher Walken and received relatively negative reviews from critics.

The 2013 sequel to Grown Ups, Grown Ups 2 is a buddy comedy film directed by Dennis Dugan and produced by Sandler, who also starred in the film. Grown Ups 2 co-stars Kevin James, Chris Rock, David Spade, Nick Swardson, and Salma Hayek and features a number of cameos from stars such as Shaquille O’Neal, Steve Austin, and Andy Samberg. Heavily panned by critics, the film was still a box office success, opening at number two in its first weekend and gaining Sandler Kids’ Choice Award for his role in the film.

Grown Ups is a 2010 buddy comedy film once again directed by Dennis Dugan and written and produced by Sandler, who starred in the film. Grown Ups tells the story of five childhood friends and their reunion thirty years later to mourn the death of their old basketball coach. The film co-stars Kevin James, Chris Rock, David Spade, and Rob Schneider and received mostly negative reviews, even though it wound up being a box office success–Sandler even bought his four co-stars brand-new Maseratis to show his appreciation.