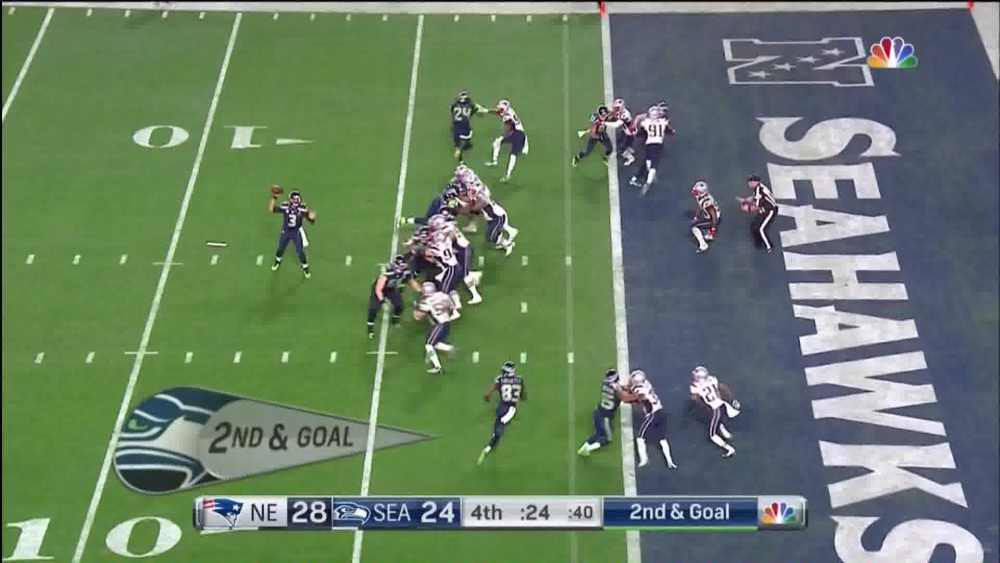 The last thing that anyone wants to be is the goat in a sports game. Unfortunately, it has happened millions of times over the course of history, with some of the bad calls or worst plays costing teams the chance at glory. Even with so many, though, I’ve selected the 15 worst plays in sports history, whether because of play call, coaching decision or just untimely luck. 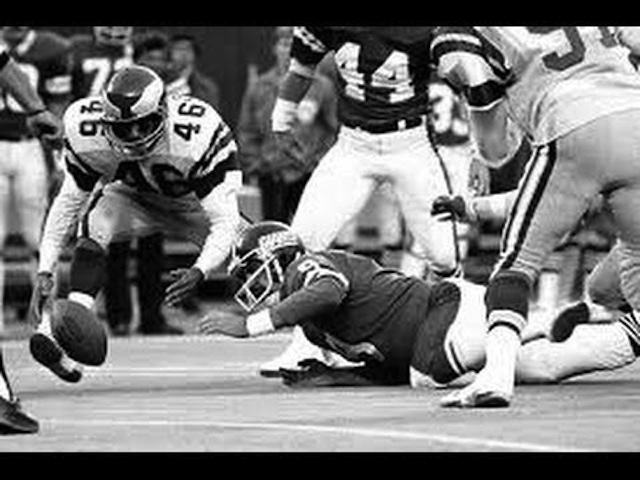 15. The Miracle at the Meadowlands

All the New York Giants had to do was kneel it down. In what should be the simplest play call in any football game, the team failed to do that, though, actually calling for a running play rather than line up in victory formation against the Philadelphia Eagles. The handoff was fumbled and scooped up by Eagles cornerback Herm Edwards, who returned it for a game-winning touchdown. 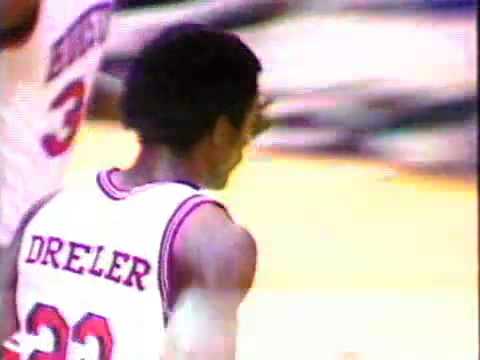 It’s a sticky situation for a head coach when one of his star players gets into foul trouble during an important basketball game. That was the dilemma that former Houston Cougars head coach Guy Lewis had during the 1982 NCAA title game versus North Carolina State, though. With future Hall of Famer Clyde Drexler sitting on three fouls in the first-half, Lewis rolled the dice and left Clyde the Glide in. It backfired, as Drexler picked up his fourth fouled before halftime, causing him to alter his aggressiveness the rest of the game in the eventual, shocking upset. 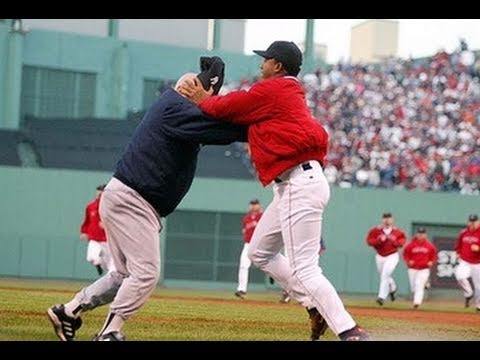 After winning 14 games and leading the American League in ERA during the 2003 regular season, Boston Red Sox pitcher Pedro Martinez proved what made him a recent addition to the Hall of Fame. Yet, in Game 7 of the ALCS that year, his manager Grady Little may have put a little too much faith in Pedro, as he kept him in for an inning too long, eventually costing the Red Sox a win against the hated New York Yankees. Leading 5-2 entering the eighth inning, the Yanks beat around Martinez, tying the game and sending him to the showers after throwing over 100 pitches. Aaron Boone would hit a walk-off homer in extra innings for the Yanks to advance to the World Series. 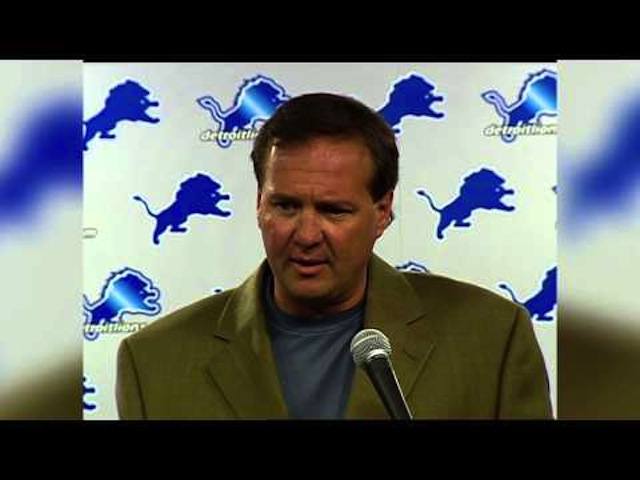 Want to know why the Detroit Lions are constantly the laughingstock of the NFL? Look no further than the decision that former head coach Marty Mornhinweg made during a 2002 game against the divisional-rival Chicago Bears as the two teams went to overtime. Then a sudden-death platform the league had then, the winner would be determined by the team that scored first. Rather than take his chances to score first, though, Mornhinweg won the toss and elected to play defense, citing the wind as a factor for choosing that side of the field. His team ended up losing a few plays later on a field-goal. 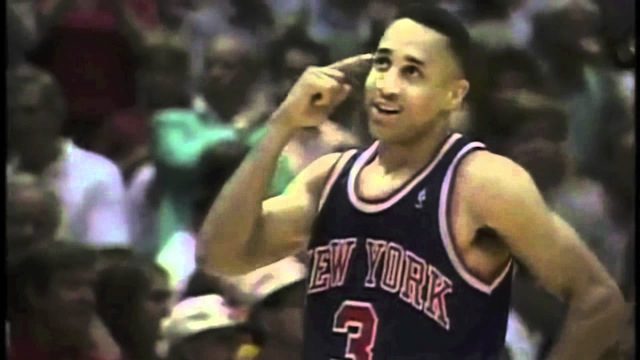 Former New York Knicks shooting guard John Starks was a pretty good player in his heyday, giving the Knicks faithful fond memories that helped them compete for a championship during the ’90s—though they never actually won one. Their closest year was during the 1994-’95 season, where they pushed the Houston Rockets to seven games before losing. The loss stung. But the decision by then head coach Pat Riley to stick with Starks during the game was worse, as the player finished 2-for-18 and 0-for-11 from downtown. 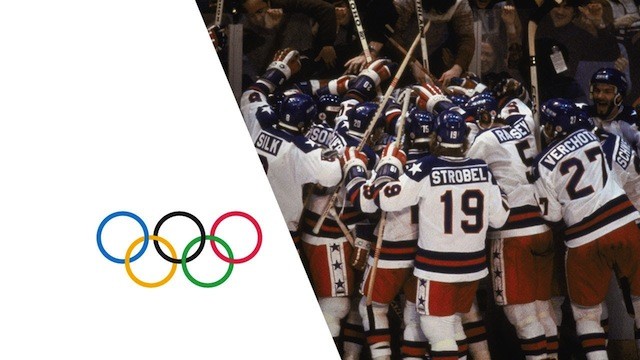 Considered to be one of the most shocking moments in sports history, the Miracle on Ice in which the United States hockey team upset the mighty USSR squad during the 1980 Winter Games was great for the red, white and blue. Unfortunately, for the Soviets, it wasn’t as great. One reason might have been due to legendary head coach Viktor Tikhonov’s move to pull his goalie, Vladislav Tretiak, between periods one and two—especially after seeing America score two, third-period goals to advance in the Olympics and, eventually, win the gold medal. 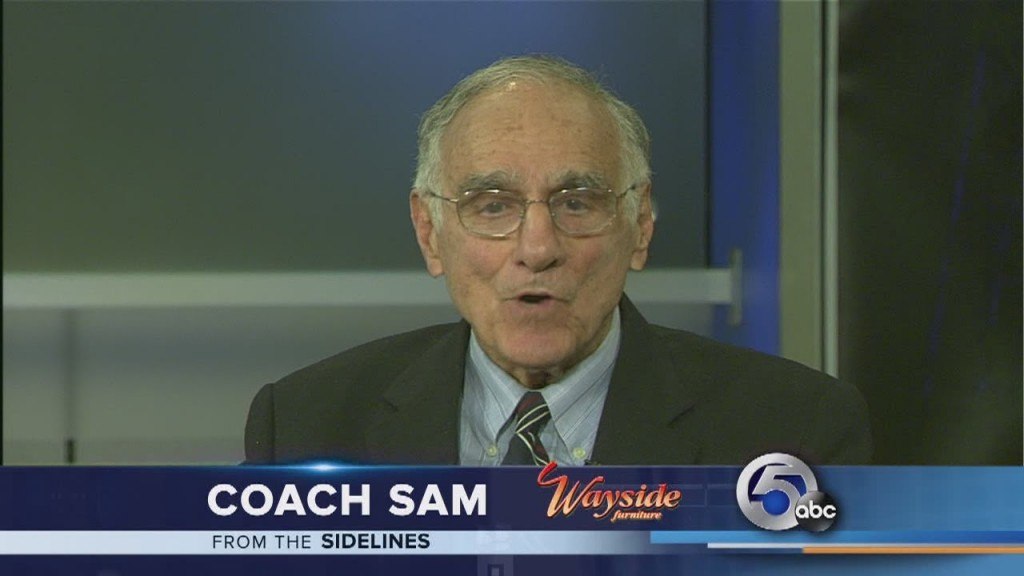 With his team in, relatively simple, field-goal position during a 1981 AFC playoff game against the Oakland Raiders, then Cleveland Browns head coach Sam Rutigliano called a play titled ‘Red Right 88’ to go for the win then and there instead of risking the chip shot. With Browns quarterback Brian Sipe dropping back, his pass was intercepted in the end zone, adding another one of many heartbreaks for Cleveland sports fans. 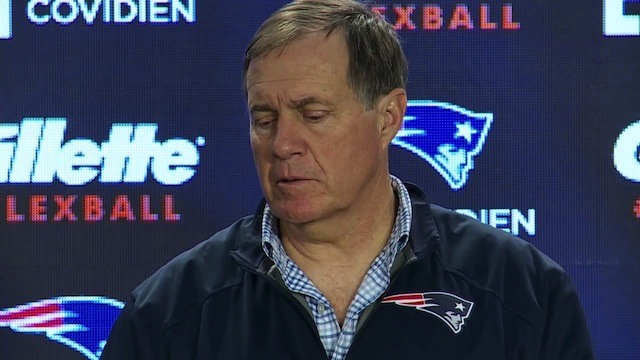 8. Bill Belichick Goes for It

There aren’t too many decisions on the football field that New England Patriots head coach Bill Belichick can be questioned about. However, the choice to go for it on 4th-and-two from his own 28-yard line during a game against the Indianapolis Colts in 2009 is certainly one of them. With a six-point lead and close to two minutes left, Belichick had his offense remain on the field, with quarterback Tom Brady completing a pass that was inches short of the first-down marker, giving the ball back to the Colts and Peyton Manning, who quickly marched the team down for the game-winning score. 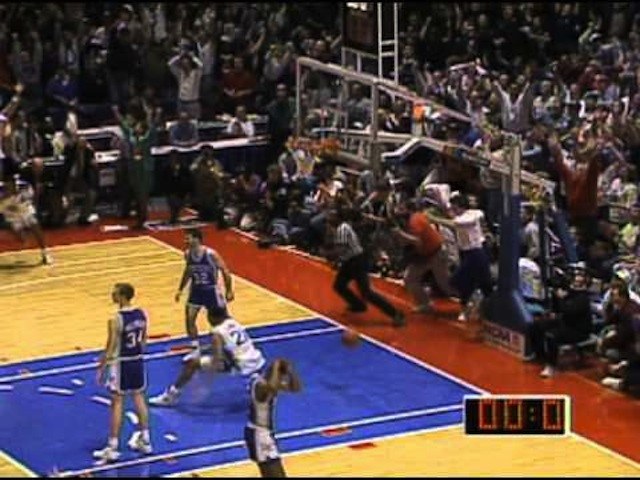 With 2.1 seconds left in the East Regional Final against the Duke Blue Devils in 1992 and leading by one, then Kentucky Wildcats head coach Rick Pitino made the debated decision to avoid guarding the inbounding passer, Grant Hill. Sending a perfect pass from his own baseline to his teammate Christian Laettner, Hill setup one of the most famous assists in NCAA history, as Laettner his the buzzer-beater to advance to the Final Four and, eventually, winning a national title. 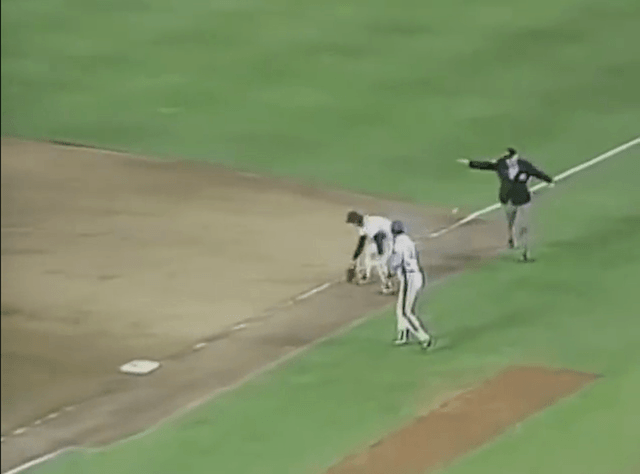 A decent manager during his four years as skipper of the Boston Red Sox, John McNamara was probably best-known during his Boston days for being at the helm of the 1986 team that lost the World Series in heartbreaking fashion—and he gets questioned for it. Instead of sending in a defensive replacement for Bill Buckner in the bottom of the ninth inning and just one out left until breaking the Curse of the Bambino, McNamara saw an in-between hop eat up Buckner, as it slowly rolled through his legs, allowing the winning run to score. The Sox would lose in Game 7 a couple days later. 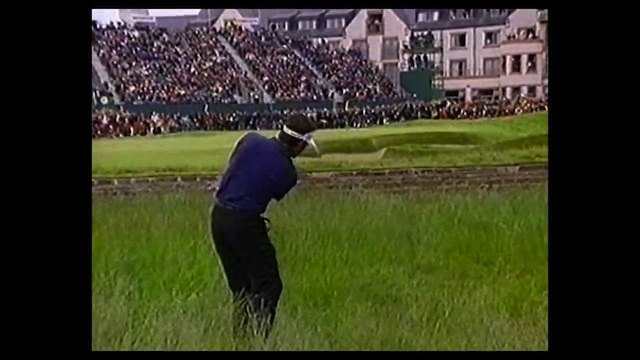 On the biggest stage in his playing career, French golfer Jean van De Velde needed to make sure he didn’t really botch the 18th hole at the British Open, having to score anything under a triple-bogey for the win. Sounds easy, right? Not for van De Velde, who chose to go driver from the tee box, beginning a hole of terror for him. Thankfully saving face by shooting three-over on the hole, he went to a three-way playoff, losing there to cost him a major championship. 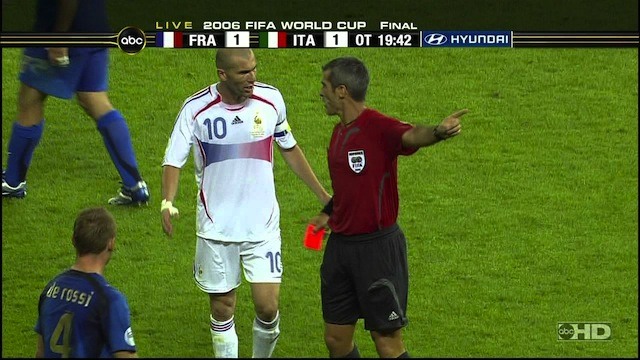 He is one of the most revered French soccer players ever, but former midfielder Zinedine Zidane had his temper get the best of him at the worst time, showing the world that even the best players get frustrated with trash-talk. During the 2006 World Cup Final against Italy, ZiZu got so irritated with opponent Marco Materazzi’s words that he actually head-butted him in the chest, earning a red card and getting sent-off in extra time. The French would lose on penalty kicks soon thereafter. 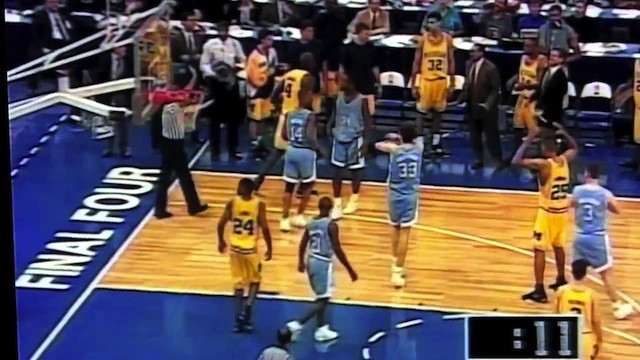 This one just hurts each time you see it, doesn’t it? Whether you’re a fan of Chris Webber or the Michigan Wolverines or not, seeing a teenager during the biggest game of his life choke so badly is never a good sight. Unfortunately, during the 1993 title games against North Carolina, Webber’s mind just froze, calling for a timeout that the team didn’t have as time wound down, earning a technical foul and giving the Tar Heels the championship after hitting a couple of free-throws. 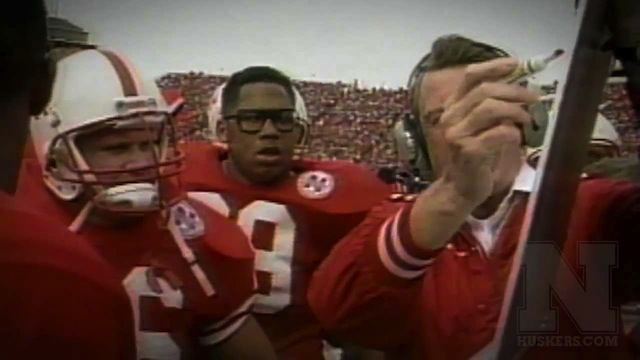 2. Tom Osborne Goes For The Win

You can’t blame former Nebraska Cornhuskers football coach Tom Osborne for thinking outside the box, that’s for sure. After scoring a late, near-tying touchdown against the Miami Hurricanes in the 1984 Orange Bowl, Osborne rolled the dice and went for a two-point conversion for the win rather than kick the extra-point for the tie. At the time, there was no national title game, and Osborne knew that a tie would earn his Huskers only a tie for college football’s championship. Nebraska’s attempt failed and the head coach had to wait until 1994 for his first national title. 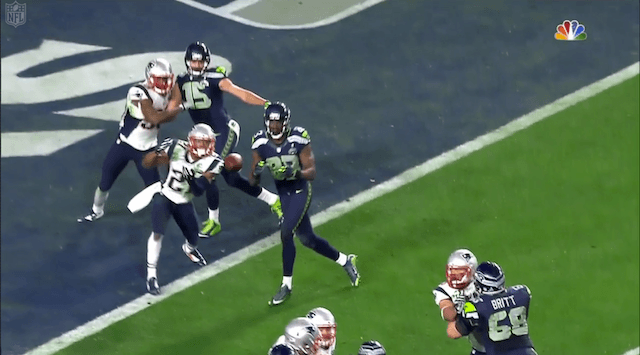 Go ahead and say that this was a good play call or that it’s too soon to put it No. 1 on the list of worst plays in sports, but one can’t make the argument that it didn’t cost his team a second-straight Super Bowl. With the ball on the one-yard line and 25 seconds left in the Big Game, Seattle Seahawks head coach Pete Carroll decided to throw the ball rather than run it, actually admitting that he was, “wasting the down” to throw a wrench into what the opposing New England Patriots were doing defensively. The ball was intercepted, though, proving that even a great coach like Carroll can overthink things a bit too much.