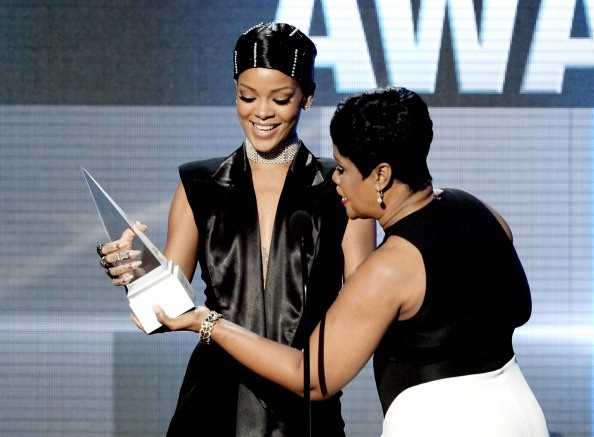 Rihanna is a Barbadian recording artist, actress, and fashion designer with an estimated net worth of $90 million. She was ranked the fourth most powerful celebrity by Forbes in 2012 with earnings of $53 million.

Robin Rihanna Fenty was born on February 20, 1988 in Saint Michael, Barbados. Her mother, Monica, is a retired accountant, and her father, Ronald was a warehouse supervisor. Rihanna dropped out of school to pursue her music career while she was in high school. In 2004, Rihanna was signed to Syndicated Rhythm Records in 2004.

After playing demos recorded with Syndicated in front of executives at Def Jam, Rihanna auditioned in front of Jay Z and L.A. Reid. That same day she signed a six-album record deal with Def Jam and moved to New York. Rihanna has released seven records in total starting with her debut album Music of the Sun in 2005. Rihanna’s first two albums were met with mixed reviews. Both were moderately successful, but never cracked the top of the Billboard 100.

Rihanna changed her musical direction for her third album and worked with Will.I.Am, Timbaland, and Sean Garrett. Good Girl Gone Bad was released in May 2007 and took Rihanna’s career to the next level. It is Rihanna’s best selling album to date with seven million copies sold worldwide, Grammy nominations, and double platinum recognition from the RIAA.

Rihanna would go on to release four more albums, but perhaps her most successful work was a collaboration with Eminem entitled “Love The Way You Lie” which sold millions of copies almost instantly. It also was Rihanna’s seventh #1 song making her the fifth highest female in those regards. That same year, 2010, Rihanna joined Roc Nation Management.

Rihanna continued to release successful albums and began branching out with other activities. She has four brief appearances in films and a very strong endorsement portfolion. Budweiser, MAC Cosmetics, Kodak, Nivea and more are among her endorsement deals that have driven her annual earnings up. The estimated value of her endorsements is close to $50 million, which is surprising because her music is and should be the top income driver for her.

Rihanna is also a presence in the fashion industry with a collaboration with Armani. She also has television programs like Styled for Rock which started in the UK and was picked up by Bravo in the United States. She has also worked with River Island and plans on releasing a new line with French fashion house Balmain.

Rihanna’s net worth will continue to grow from her music catalog, tour revenue, endorsements and growing presence in the fashion industry. She’s already an accomplished singer with multiple Grammys, AMAs, and Billboard awards to her name. Rihanna is one of the most popular musicians in the world right now so we will be monitoring her net worth. The question will be if Rihanna will focus on growing her business ventures outside of her music. At times, it seems like she likes hanging out on the beach more than anything else. Either way, we expect her net worth to grow consistently.