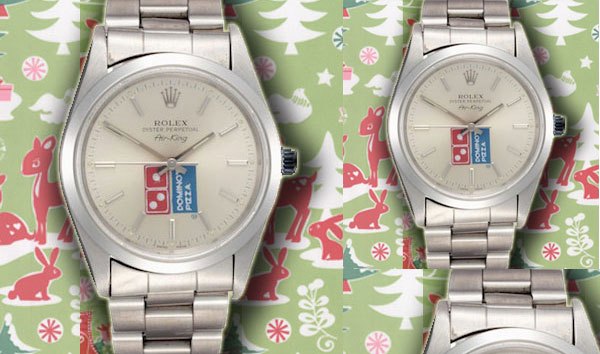 If there’s one thing that I really love, it’s pizza. And, for whatever reason, my go-to place to order from these days has been Dominos. That may sound weird, but, in my opinion, there’s nothing tastier than some greasy, cheesy, bready, pizza from the place to watch football over all weekend long. And while I obviously love the pies the place cooks up, I recently found out about something that might make me love Dominos even more—an, alleged, customized Rolex watch. That’s right, arguably the world’s leader in high-end timepieces, has partnered with the pizza shop to create a watch that is sure to be delicious to look at. But because it’s a pretty unusual relationship, I had to dig a little bit deeper to see just how this came to be—and here’s the story.

It seems that, after finding the watch for sale on a few different websites, the project began as early as the 1980s, when Dominos had been rewarding employees of theirs with Rolex watches through a rewards program called the, “Rolex Challenge.” Whenever a certain franchise hit a certain sales quota over the course of a month, the store would get a Rolex Air-King as a trophy—although I was unable to determine if it was the manager who received it, some random and lucky employee or the store had to share it.

So while it might seem cool to get extra time off or more money as a bonus for selling the most pizzas over four weeks, Dominos got a little bit more creative, giving this option instead—which is actually pretty cool if you ask me. And just when you thought that a high-end company like Rolex would refuse to allow Dominos from putting their name and/or logo on a watch, thinking it may tarnish the timepiece, the watch company actually agreed to it, giving the pizza maker something that’s both unique and unmatched by other companies.

To think that other big businesses in the same luxury space as Rolex had never made the request is actually pretty astounding. Brands like BMW, Cole Haan or W Hotels would have gained a ton of good publicity for running a program like this. Instead, it was Dominos, though,  with Tiffany & Co. the only other company that is rumored to occasionally run a similar, personalized deal for their employees—with those even being rare. And when you consider that Dominos is actually the only one that are produced by Rolex—unlike Tiffany’s which simply buys the watches and just prints their logo on the dials—this is something that I found to be really amazing.

There have also been a few other findings of Coca-Cola Rolex’s on the Internet every once in awhile, but, like others, those are given in rare instances—for example, an employee being loyal to Coca-Cola for 25 years of service. On top of that, the watch that Rolex offers up to Dominos is the Air-King model, which, while not the most expensive model in the company’s catalogs, is a lot more practical for someone to actually wear every day to work or around town, rather than one that’s diamond-encrusted and should be rubbed down and stored in a lock box when not being used.

While the Dominos watches are still very popular and desired by employees—after all, it’s still a reward for great performance—the models look a little bit different than they did in the past, with one of the most distinctive dials being altered about five or 10 years ago. Rather than deck the face out with a Dominos logo or script, the company decided to move it to a less visible spot on the bracelet, making it more subtle for those who wear it.

Of course, no matter where the branding for the company actually is, hearing that they reward their employees with a somewhat secret program that includes giving away a free Rolex is pretty cool—and a strong PR move that probably attracts future candidates, shows loyalty from the company to their own and helps motivate employees by hoping to become one of the people to actually collect their very own Rolex. And with this promotion for Dominos employees being implemented way back in 1993, there are a few options in which online shoppers can occasionally find them popping up in watch shops and other retailers on the Internet. Even with all of the changes that Dominos has incurred over the years, I really hope that they still find themselves handing out Rolex’s for strong performance—because it makes me appreciate them even more for a job well done.

For those who might be looking to get their hands on one of these customized watches, you might want to consider going to Chron24—which is a reputable seller of certified watches—as it has one of the Dominos versions in its store right now, featuring the original design which has the pizza company’s logo right in the middle of the face. It might not be one that you earned yourself, but for those who are interested in owning a rare Rolex, it might be an option you want to look into. Just be prepared to pay a somewhat, premium price for the high-end timepiece, as it’s still priced at $3,233 in Chron24’s online shop. If you ask me, though, that’s actually worth considering—just don’t brag to your friends that you actually earned it through meeting sales goals, because that might be a bit too cheesy—sorry, pun was definitely intended.