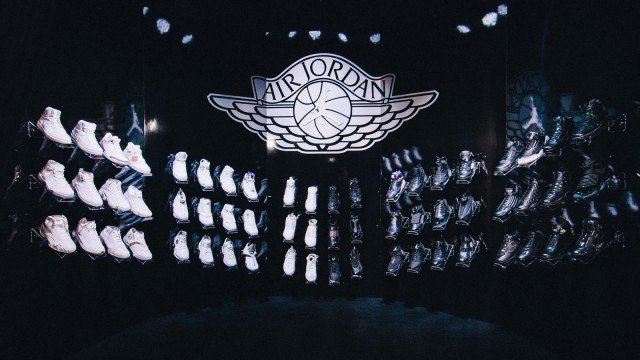 Kobe Bryant will go down as one of the greatest basketball players of all time, and since he is now retiring, many people are paying homage to this legendary player. Despite the fact that Kobe has his own sneaker line with Nike, the Air Jordan brand has done something quite special. They have recently just gifted Kobe an entire set of Air Jordans at a special ceremony in Toronto.

The gift was given to Kobe Bryant at the Air Jordan All-Star Party this past weekend, and it’s quite the set. The president of the Air Jordan Brand, Larry Miller, presented the gift to Kobe. The entire set is comprised of every single Air Jordan sneaker that is currently available for sale; from the Air Jordan 1 to the Air Jordan 30. All of the sneakers are in white, and it’s certainly quite the gift, to say the least.

Additionally Air Jordan created a second set of sneakers that were put up on sale for charity, and that set is also comprised of every single Air Jordan Sneaker you can currently buy. That set also came with a pair of Air Jordan 3’s and 8’s that were worn by Kobe during the 2002-2003 NBA season. After an intense bidding war the entire collection sold for an astounding $240,100 dollars. It’s great to see the Jordan brand do something like this as Kobe certainly deserves a gift this amazing.