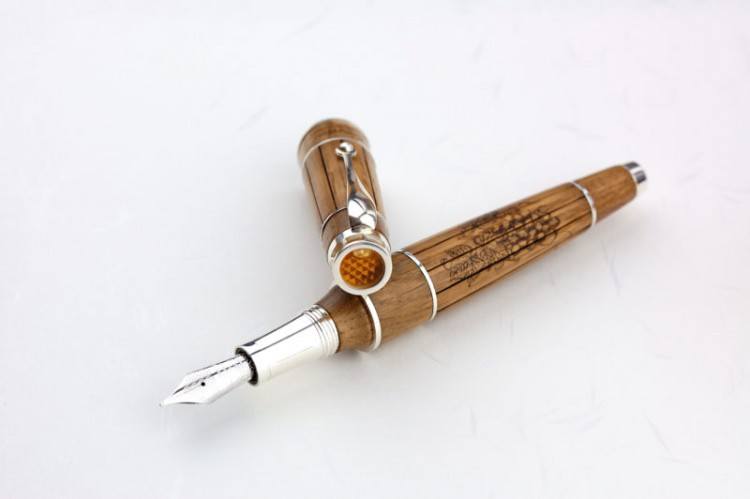 It comes as a surprise that Montegrappa would design a pen inspired by Cognac, but once discovered, the entire project certainly is in character for the company known for its luxurious pens. The Italian manufacturer has created fine, creative, writing instruments in Italy since 1912. Founded in Bassano del Grappa, Montegrappa has been the pen chosen by authors and used by royalty, presidents and popes.

Some of those who have written with a Montegrappa fine writing instrument include:

The list of notable personalities is much longer, indeed. With over 100 years of success, the company maintains the very first flagship store in Bassano del Grappa, and a second one in Milan, where luxurious fashion is a given. Both stores feature the finest of curated writing instruments, timepieces and accessories.

The 1762 Gautier Cognac encapsulated in the Montegrappa pens was recognized by Guinness World Records as officially the oldest ever sold at public auction. A single bottle of the Cognac was used to create the Montegrappa pens, as only a drop of the precious alcohol is included with each pen. Wealth Solutions purchased the bottle in 2014 at a Bonhams auction. Bonhams Fine Art Auctioneers & Valuers, New York City, organized the auction, which featured rare and old beverages. The 1762 Cognac was in a hand-blown bottle, with a driven cork and a wax seal. It had a hand-written label, was bottled sometime in the 1840s, had no alcohol content indicated and was covered with cellar grime. It was believed to have come from the estate of a wine consultant in Europe. The bottle sold for $59,500 USD, including premium.

Wealth Solutions also used the 1762 Gautier Cognac to create a Cognac Watch for the company’s Spirit Watch line, which features watches which include the alcoholic beverages of legend in capsules tucked inside the watch’s interior movements. In collaboration with Armin Strom, the Swiss Independent Watch manufacturing firm, the limited edition of 40 timepieces was launched at the 2016 Baselworld fair. These timepieces were created for Wealth Solutions clients. Glaude Greisler, chief horologist of Armin Strom, created a sapphire crystal capsule to hold a single drop of alcohol within the interior of the mechanical watches. It was a first in Swiss watchmaking history. The bottle containing the Cognac was opened on November 4, 2015 in Poland at a ceremony honoring the beginning of the cooperative project between Armin Strom and Wealth Solutions.

In 2016, the collaboration between Montegrappa and Wealth Solutions resulted in the Cognac Pen. Both companies are known for their luxurious collector pieces. Each Cognac Pen is placed in a wooden box which contains an inkwell. The boxes are lacquered, and beautifully constructed. There is a memorial book with information about the Cognac Pen included. Distinguishing the oak wood body and cap of each pen is the fact grape growers in the Cognac region of France do not consider a cognac to be Cognac unless it has been aged at least two years in an oak cask in the Cognac region. By the laws of France, no liquor may be called Cognac unless this requirement is met.

Montegrappa’s meticulous crafting of fine writing instruments is acknowledged around the globe. The Cognac Pen project has produced a collector’s pen which is unique in the world. It is a luxurious melding the traditions of Polish creativity, French style and Italian artistry. This pen takes its place in a long line of noble fountain pens created by extraordinary craftsmen in the historic and extraordinary factory which has existed for more than a century in the Vicenza province where it was founded.