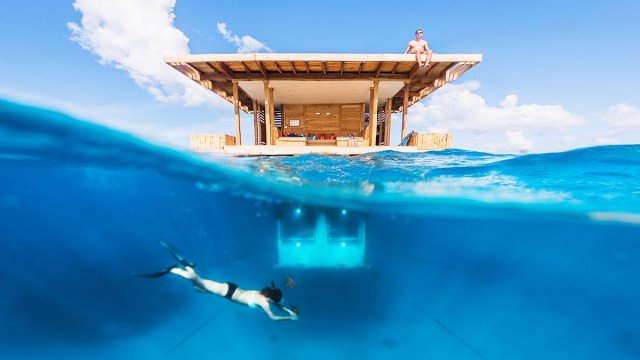 There’s nothing quite like staying at a one-of-a-kind luxury hotel. The accommodations are beautiful and plush, the staff is always amenable, and you never have to lift a finger to get what you want, when you want it. But after you’ve stayed at a few places like this and you know the routine, what else is there for you to experience?

Most hotels soar into the sky, but underwater hotels explore depths not usually seen by most people. The vistas are unparalleled, and a night in an underwater hotel is not likely to be one you’ll soon forget. If you’re on the hunt for something cool and unique for your next prestige-level getaway, perhaps you’d like to try sleeping with the fishes — in the non-Godfather sense, of course. Check out one of these ten best underwater hotels. 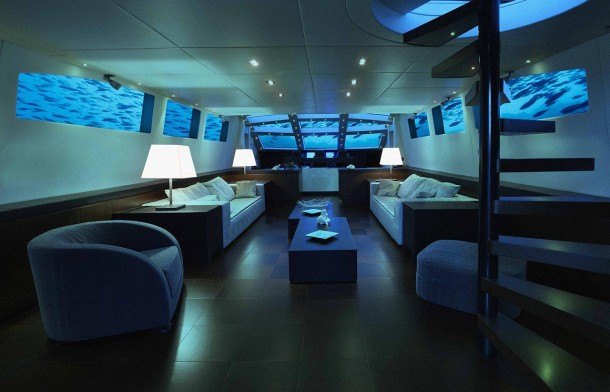 Bunking out in an ordinary submarine may not sound like your idea of a great vacation, but then again, Lovers Deep is no ordinary submarine. It’s a high end leisure sub, with top of the line furnishings and an on-board staff of three: a captain, a butler, and a chef who will prepare you and your guest a romantic meal complete with champagne. Panoramic windows allow for an unmatched view of the surrounding reefs, it’s the ultimate in secluded romantic stays. It’s not for the thrifty, though, as a night in Lovers Deep rings up at £175,000, or almost $250,000. 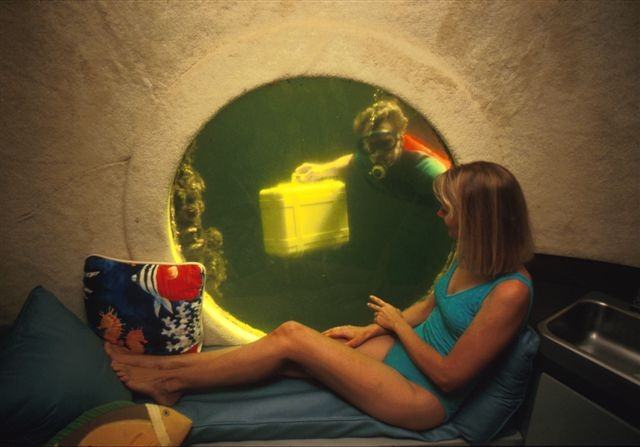 Named for Jules Verne, the author of Twenty Thousand Leagues Under the Sea, Jules’ Undersea Lodge in the Florida Keys is the world’s oldest undersea hotel. It used to be a research facility, so while the romance factor may not be as high as it is at some other places on our list, a night at the Lodge is definitely a memorable experience. If you want to spend the night here, it will run $800 for a couple, and there’s a catch: you need to be a certified SCUBA diver, as that’s how you get down to the Lodge.

Located in the clear tropical waters off the east coast of Africa, the Manta Resort is an all-inclusive, half-submerged accommodation that offers both underwater and above the surface views. Rooms are in with the fishes, but guests have a roof in the sun to enjoy the sun, stare at the waves, and marvel at the stars. Want to swim? Just hop in. A night at the Manta starts at $1500 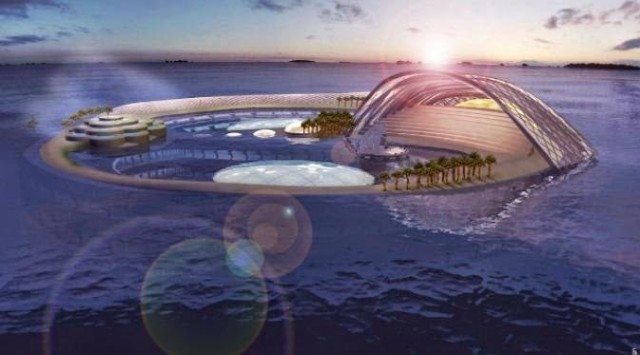 The first of three Dubai underwater hotels on our list, the Crescent Hydropolis is poised to be huge, with over 200 suites. Yes, it’s still under construction, but the promise and potential of this impressive structure has earned it a spot on our ten best. The utmost care has gone into the architectural design of the space so that it feels like a natural extension of the surroundings rather than an imposition on the water. An abundance of windows gives guests practically unimpeded views of the sea life swimming above, and the furnishings are subtle yet lovely. While the date for the official opening of the Crescent Hydropolis has not yet been announced, we know that this will be a destination to look forward to visiting. 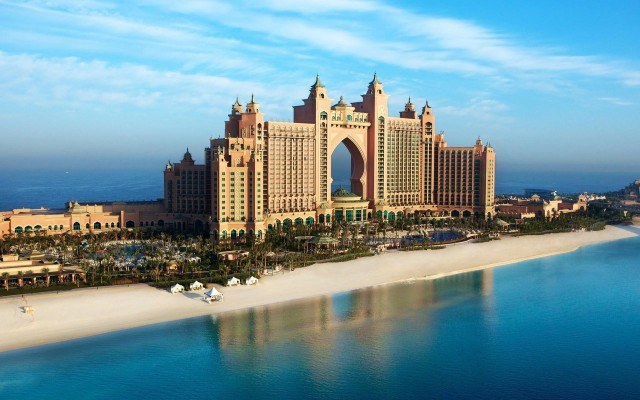 Another incredible spot under the water in Dubai, the big draw of the suites at Atlantis The Palm is the giant picture window in each bedroom. You can relax on your comfortable bed with a cup of coffee (or a glass of something stronger) and, instead of watching television, gaze as the ocean’s creatures drift past. Rooms cost a whopping £5500, or $7800, per night, but the views are, of course, priceless. 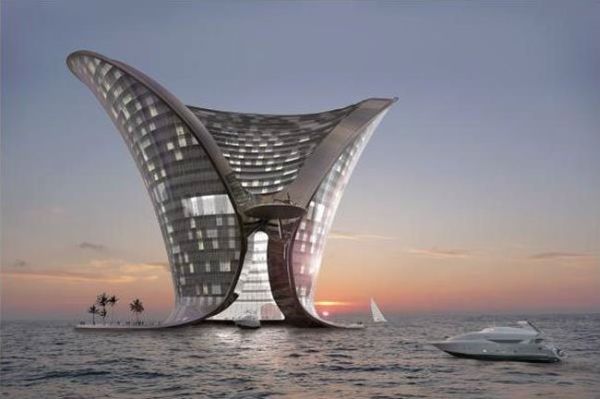 The last Dubai spot on our list is the Apeiron Island Hotel, another destination that is still in its concept phase but holds great promise. The architectural renderings of the building are reminiscent of a giant calla lily bursting out of the sparkling blue sea. While many of the hotel’s rooms will be above the surface, underwater accommodations (including a spa and a restaurant) will be available to guests. And did we mention it’s poised to be a seven star hotel? It sounds like a bucket list place if we ever heard of one. 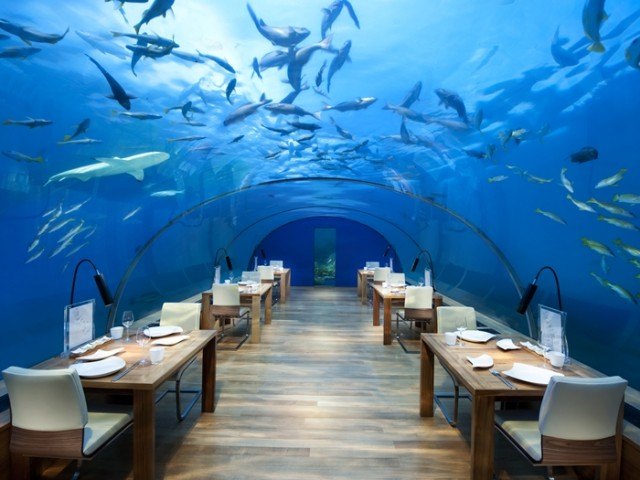 Just north of the equator in the Indian Ocean are the atolls of the Maldives. The water is warm and clear, making it a perfect spot for an underwater restaurant. Yes, restaurant — you can’t exactly spend the night under water at the Conrad Maldives Mongali Island (though you can sleep in a room above the surface), but we’d be remiss if we neglected to mention it on our list. This seven-table spot is in a see through tunnel 16 feet below sea level and offers a prix fixe dinner for around $300. You can dine and watch the ocean world move all around you. 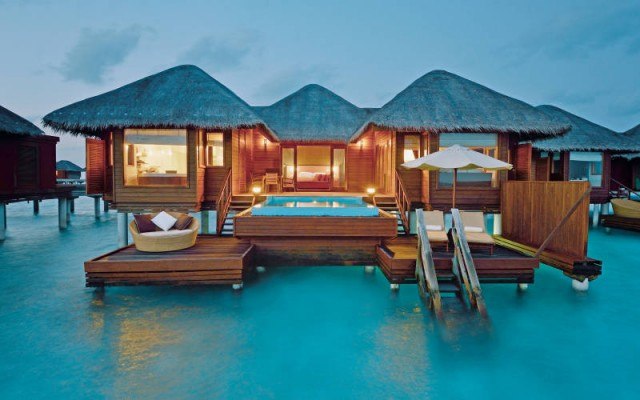 Also in the Maldives is Per Aquum Huvafen Fushi, and while that may be fun to say, it’s even more fun to stay the night at this island haven. The rooms themselves are actually bungalows and pavilions, some have private pools, and they’re all situated on the water rather than under it. However, a top end spa and a wine bar are both located below the depths. 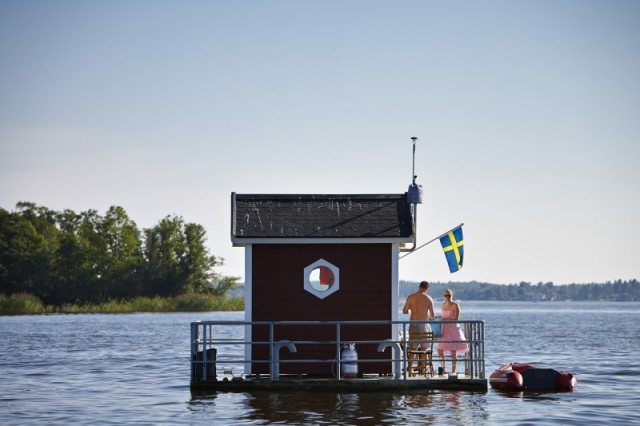 Scandinavia may not be the first region that comes to mind when you think of underwater hotels, but the Utter Inn Hotel in Sweden has been charming guests from all around Europe. It’s spartan, for sure: it looks like a small red barn floating on the surface, and the small, two-bunk room beneath the surface more closely resembles a sleeping coach on a train than a luxury hotel suite. Still, the underwater window provides a glimpse of the lake below, and there’s a small deck to relax on and watch the boats go by. 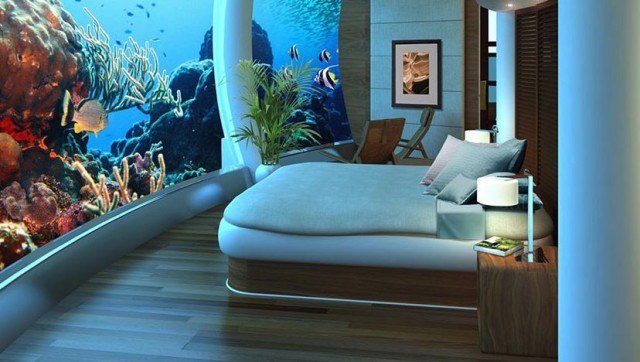 Currently under construction and taking names via waiting list for reservations, Fiji’s Poseidon Underwater Resort will be a mile long when it’s completed, with 22 guest rooms and all the amenities of an upscale hotel. Bubble-like windows provide a lookout on the seafloor and all of the creatures that call it home.