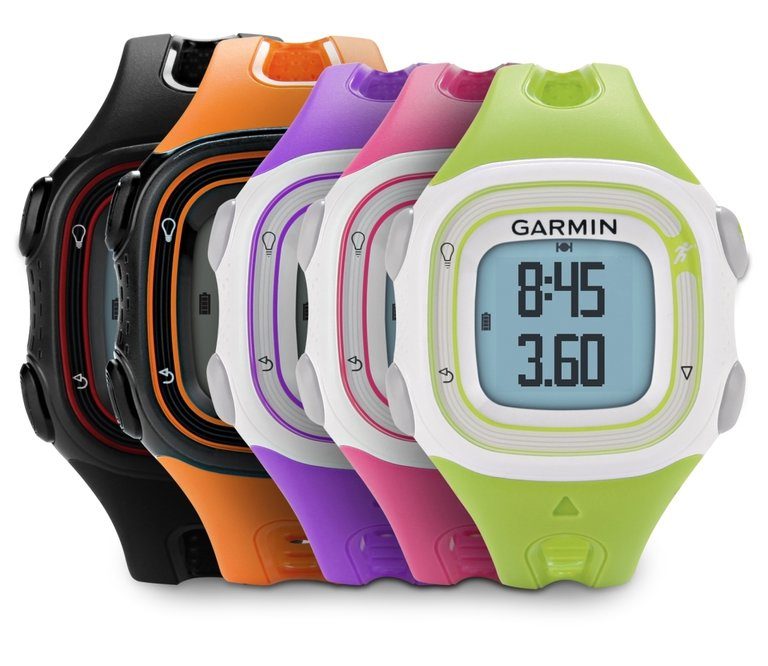 In 2012, navigation equipment producer Garmin unveiled the Garmin Forerunner 10, a GPS running watch that tracks your distance, speed/pace, and calories. The stylish and simple GPS captures every mile, starts with the push of a button, identifies personal records, features a Virtual Pacer that compares current pace to target pace, and has the ability to plan, review, and share runs on Garmin Connect. According to Garmin’s website, the Forerunner 10 “is so easy to use, you can start your run with the press of a button. As you run, you can see your time and distance clearly displayed on 1 screen and calories and pace on another. You can also customize the settings to show pace and distance on the same screen.” The GPS running watch is also Garmin’s lightest and most comfortable watch and is available in multiple color combinations, including violet/white, green/white, pink/white, black/silver, black/red, and orange/black (the latter two have a slightly bigger watch face and wider wristband). With a retail price of $129.99, the Garmin Forerunner 10 also features up to 10 days of typical rechargeable battery life, motivating feedback, and a number of simple training features, making it one of the greatest–and simplest–GPS running watches out there.

Garmin is a multinational corporation and producer of navigation equipment that is most well known as a producer of consumer and professional-grade GPS receivers. Founded in 1989 by Min Kao and Gary Burrell in Lenexa, Kansas, Garmin is a public company headquartered in both Switzerland and Olathe, Kansas with a current market cap of $10.74 billion. In 1983, Gary Burrell recruited Min Kao from defense contractor Magnavox while working for the former avionics company King Radio. The pair later founded Garmin in 1989 under the ProNav name–ProNav’s first product was a $2,500 GPS unit–and later adopted its current name, Garmin, which was comprised of the first names of its two founders. In 1991, the company received its first customer, the United States Army, and achieved a profit of $23 million four years later. As of May 2014, Garmin has sold over 126 million GPS devices.

For more information on Garmin and the Garmin Forerunner 10–or to buy your own–visit garmin.com and make sure to check out the “Move Me” promotion for the Forerunner 10 below, courtesy of Garmin’s YouTube channel.