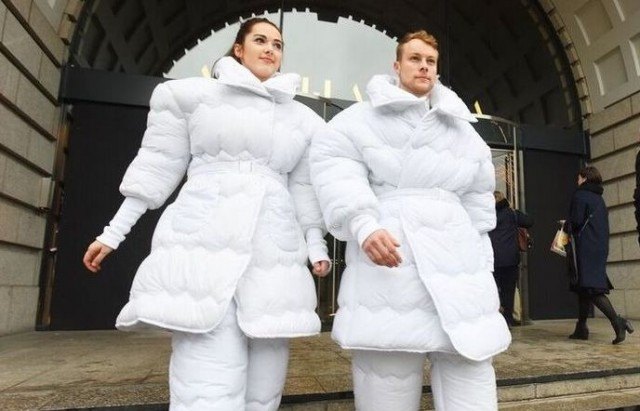 There’s always going to be some kind of crazy fashion out there.  That much we know.  What actually makes it into the main stream is another thing entirely.  Right now, however, there are some legit trends that are beyond my comprehension.  Why people wear pajamas as regular clothing disturbs me.  The entire concept of Normcore Fashion infuriates me and makes no sense.   Trying to look so you just blend in?  What does that even mean today?  Apparently it means looking like a women in her 70s in the 1960s.  And don’t get me started on Hoof heels.  Yes, people actually wear high heels that look like the hooves of horses.   But just when you haven’t seen them all, the Wearable Duvet Body Suit comes out.  Yup, I wish I were joking about this.    Apparently if you’re obsessed with beds you can own a Wearable Body Suit, called a Suvet, made possible by Jurys Inn, a hotel chain based out of Dublin.   And here’s what scares me.  This video:

Just listen to this.  Listen to the narration.  It’s some classy sounding British woman who sounds like she’s reporting live from Paris.  And if you actually listen to what she’s saying, it’s made out to be like this is the next thing in fashion.  And if there’s one bet I’m willing to make, it’s that these Suvets are super expensive.   Please tell me the fashion world doesn’t actually take this seriously.  Though I will say this.

And did you know there’s already a product called the “Lazy Patch?”  They’ll run you $120 which means the Suvet has got to be closer to $500.

If you find yourself the owner of one of these concoctions and you actually wear them in public, then you are certainly part of this list I came up with.

1. You’ve been incredibly rude to a waiter. So rude you didn’t even realize it. You talked behind his back and he heard you. You stiff him on the tip, and you belittled him in front of everyone you know. And you did it while wearing your Suvet.

2. You went on some kind of diet cleanse because you thought it was the in thing to do, just like right now you’re wearing that Suvet because you think it will have some profound effect on the world when you really just look like a giant marshmallow.

3.  You’ve owned a shirt with rhinestones on it. Don’t ask me why I just know it. If you’re gonna by a Suvet and wear it in public then you’ve definitely been into Rhinestones.

4.  You’ve experienced being a vegan at one point in your life.  One thing I’m sure of is this.  If you’re a meat eating, carnivorous male who likes his steak and potatoes, you’re not wearing a Suvet.  But I could easily see vegans digging these things.

5.  You’re a male who urinates while sitting down.  Sorry but this is 100% true and there’s no disputing this.

6.  You’ve seen a pink house, actually thought it was pretty, and liked the color.

7.  You’ve driven a car with fur interior car seats.  Either that or you’ve had leopard print car seats.

8.  You’ve worn the same boots that Jim Carrey wears in Aspen in the movie Dumb and Dumber.