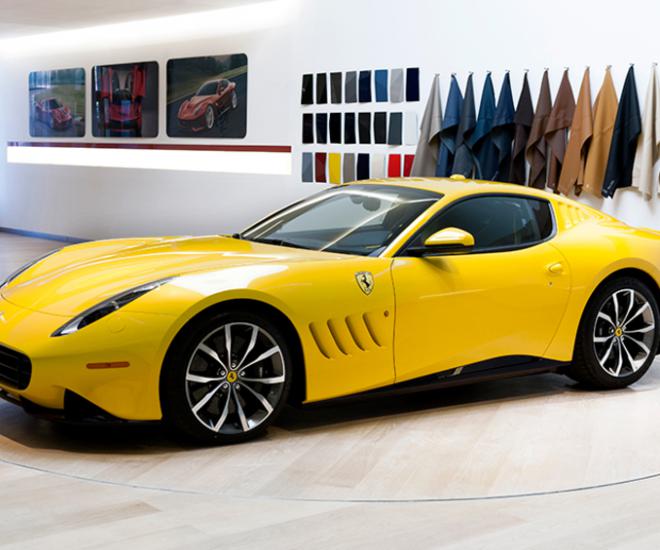 It has swag…this Ferrari. But of course, that runs in the family. Rightfully so. There isn’t a Ferrari addict that hasn’t noticed its four side gills and their genetic relationship to the spectacular 1964 Ferrari 275 GTB/C Speciale. The Giallo triplo strato paint has also prompted more than a few mentions. It’s a nod to other Ferraris featuring yellow finishes, and the triple layer paint is an eye catcher accented by blue carbon trim work.

It took two years of gestation, but this prancing horse has left Pininfarina Special Projects for its new home. Dr. Rick Workman has added it to his own considerably wealthy stable, and Ferrari fans everywhere are keenly aware that the “RW” in its name are Dr. Workman’s initials. Such is the privilege of bespoke Ferrari ownership.

The RW Competizione debuted in Daytona, Florida at the Ferrari Finali Mondiali. The four day Ferrari World Finals took place for the first time in North America from December 1st through the 4th, 2016. Ferrari competitors from around the world came to challenge each other, and other prestigious one-off creations were on display. The RW Competizione was flanked by the Maranello 2011 P540 Superfast Aperta made for Ed Walson, whose father invented cable television, and an F12-based roadster which also emerged from Special Projects. Several custom Ferraris of lemon color were unveiled at the time. Social media buzzed with photos posted online, and that is when public speculation began.

News of its specifications began to seep out. The custom RW is a meld of the best of the F12 Berlinetta and the F12 TdF, which give the new vehicle elegance and performance. The chassis is drawn from the F12 Berlinetta, while the body is inspired by the mid-Sixties 275 GTB. The gills, the B-pillar louvers, and the oval-shaped grille are signature elements of the 275 GTB which was the GT class winner at the 1965 Le Mans. But Maranello’s distinctive design features are completely contemporary. The one design element which is completely unique are the headlights. That is notable, as Ferrari noted, because safety testing for new headlight designs is extremely expensive and usually avoided, even for bespoke vehicles. No other Ferrari in existence has the same headlights.

The profile of the RW has several new features which have caught the eye of fans. In addition to the four stylish front fender gills, there are three included on the rear fenders. There are also triple louver vents replacing the mid-Sixties rear quarter windows. Though the vintage version doors had deep dents, these are not present in the new RW. The new door design is smooth and classic. Adding to the panache of the RW are spoke wheels in a double-five pattern, and these are also a nod to the wire rimmed wheels of the vintage 275 GTB without sacrificing modern style. The honey-yellow colored paint is thought to be a tribute to the Le Mans Ecurie Francorchamps Belgian sports car racing team which won the 1965 GT class with the 275 GTB Ferrari. Their racing uniform included stripes of red, black and the distinctive yellow.

While the exterior design alone has elicited a myriad of comments, even more speculation surrounds what the RW may be packing under its hood. Many assume that the engine is a 6.3 liter V-12, which would be the case for the F12 TdF limited-edition production line. If so, that would give the supercar torque of 520 pound-feet and 769 horsepower. It should be able to launch from zero to sixty miles per hour within three seconds. The bespoke transmission is dual clutch, with speedier upshifts and downshifts: 30 percent and 40 percent, respectively. The engine also includes variable-geometry intake trumpets and mechanical tappets inspired by Ferarri’s Formula One racing cars. There is a steering system which is four-wheeled for increased stability and sharper turns.

Peeks through the windows show that the instrument cluster area, the steering wheel, and the seats have yellow accents on the cabin’s interior black finish. Some speculation exists that there are carbon fiber trim sections, custom floor mats and customized additions to the instrument cluster, but Ferrari has yet to release official photographs.

Though all performance is a guestimate, this custom RW Ferrari comes from thoroughbred Ferrari stock and inspiration. The privacy of this information is matched by the secrecy of the price paid for the RW’s perfect performance and style. What is certain, is that Ferrari fans worldwide consider Dr. Workman to be one very happy, and wealthy, Ferrari owner.