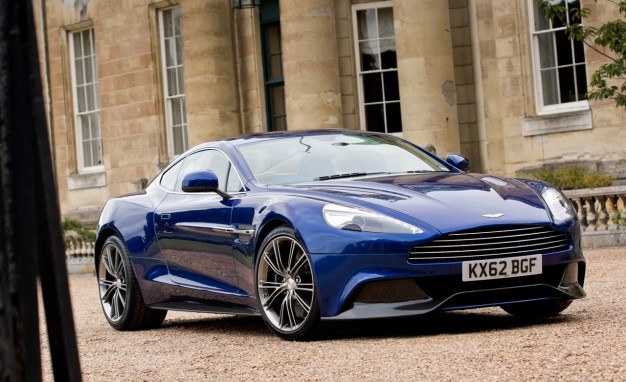 Aston Martin is one of those celebrated British brands synonymous with class and sophistication. The fact that it’s the choice of a certain MI6 spy who goes by the name 007, makes it all the more irresistible. Now for the past few years they had three cars in their stable which shared the same DNA and a lot more. If you saw them on the road chances are that you wouldn’t be able to differentiate the DB9 from the DBS or the Virage. The 2015 Aston Martin Vanquish is different from these models. It is instead comparable to the brand defining supercar One-77 from 2001. The all-new carbon fiber bodied Vanquish aims to preserve the VH DNA and also give its pricier rival the Ferrari F12 a run for its money.

The Vanquish does complete justice to the Aston Martin tag. It is impeccably styled and looks majestically old fashioned as compared to its rivals. It is a car that you can imagine the European scion to drive away at the crack of dawn. Owing to the versatility of the carbon fiber, the car has some of the best sculpture on a GT. The beautiful shape of the front bumper makes it look aggressive and suave at the same time in a way that is distinctly British.

The rear spoiler has been traded for a set of aerodynamic blades made of carbon fiber. The now trademark Aston Martin side vents have been beautifully recreated on the body ahead of the front door. As you walk towards the car it welcomes you with a door that opens both upward and outward. They’re not exactly heavy but certainly long and make getting in and out of this car a smooth process despite its low stance.

It’s clear that the only motive while designing the car was to give the driver uncorrupted driving pleasure sitting in a cocoon that cushions him from everything outside.

The biggest change from its predecessors is probably the 8HP ZF automatic transmission which has almost become a standard feature for all cars in this bracket. What stands out in this is it has been incorporated into a transaxle layout. It makes the car feel nimble at your fingertips and brags of 130 ms speed shifts.

The engine is a tad more powerful with the 5.9 litre V12 offering 568 Bhp at 465 lb ft of torque. This means that the Vanquish is a bit swifter and dashes from 0 to 60 mph in just 3.6 seconds and from 0 to 100 mph in 8.3 seconds. This is the best car from the Aston Martin stable in terms of acceleration in the entire 101 year old history of the company. The top speed also increases to 201 mph and the average fuel consumption increases to 22.1 mpg.

Anybody, I repeat, anybody who drives the 2015 Vanquish will fall in love with the engine. While the V12 may not have the brute force that its other rivals boast of but you can search the earth and the moon but you’ll not find a more charismatic powerhouse. Tickle the accelerator a bit and the engine purrs lazily. Push it a bit and the noise becomes dense and hard. Push it harder and the engine growls to life the way you feel it might just breathe fire! It is undoubtedly and irrefutably the standout feature of the Vanquish. This is the sort of uniqueness a V12 accords to its beholder.

Unsurprisingly an engine like this coupled with the hand crafted engineering by some of the best craftsmen in Europe makes for a very good driver’s car. Ride quality has improved by leaps and bounds. The suspension is firmer and the ride may feel a bit stiff but that is not really noteworthy. There are three modes: Normal, Sport and Track. The normal mode can be used for city travel and offers decent handling. In the ‘sport’ mode a bit of stiffness has been sacrificed for better grip and control. The ‘Track’ mode is actually meant only for on-track adventures and the ride is extremely stiff to deal with the high speed encounters.

The hydraulic power steering can be a lesson for all the companies out there who swear by electric models to offer the best driving pleasure. The experience is magnificent and it feels like an iron grip on the road. The rumble feels beautiful as you drive through and you can control every minor movement of this beast. Starting from the word go, the car responds like magic and can provide you with an explosion of speed as you step on the throttle. Even while coming to a halt, the recovery time solely depends on the driver.

This beast has been tamed over hours of refinement and its composure stands proof of it. You may sometimes get overambitious due to sheer number of horses at play and even go full throttle into a corner. Fret not because the stability control is there to keep you car on the road. 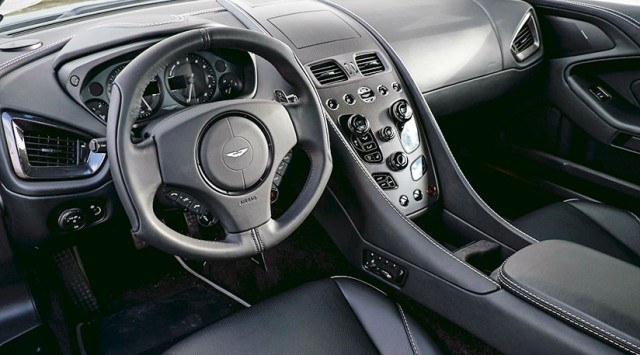 For a beast this big, the interiors feel remarkably classy. It triumphs over all other predecessors from the stable of Aston. The new central console looks beautiful in a very elegant manner. The touch screen controls feel brilliant on your fingers and are almost as responsive as your Smartphone. The high quality tan-leather gives the cockpit a very rich look. As you slide into the royal low set seat what catches your fancy is the increase in the amount of room.

There seems to be more room for almost everything- be it your elbow or your legs or for all that stowage. The interiors have changed from the DB9 and this makes it look very sophisticated. The markings on the controls could be made a bit more prominent though. The audio system sounds amazing and will give you company for those long rides. Speaking of long rides, the relatively small 20.6 gallon fuel tank may play spoilsport considering its thirst for gas. But for a car that has so much else to offer, these minor potential glitches can be overlooked.

The Vanquish is one of the most glorious things you can buy. So even if its peers have much better bragging rights on paper, if you a car lover and want to see those heads turn as you move, this suits your purpose beautifully. It offers more character and charisma than all its rivals and is one of the most potent vehicles to carry Aston’s brand into its new era while preserving its core philosophy.