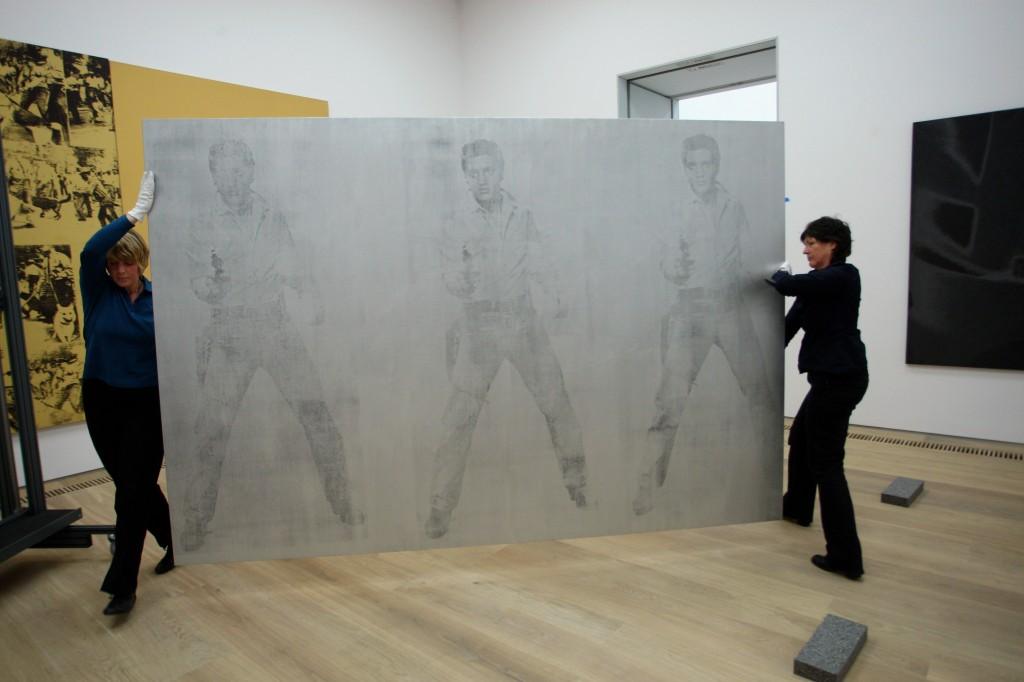 Andy Warhol is one of the most famous artists of this last century, and is praised for his modern,”pop” art. You have probably seen some oh his work before, as they are just so well-known. Art collectors around the world would love to have the chance to own some of his work, however dealing with art of his caliber, the pieces are often very expensive. Well, recently one of his paintings was auctioned off at Christie’s Auction House in New York City as part of their “Post-War and Contemporary Art” section, all of those pieces fetched a total of $852.8 million with Andy Warhol triple Elvis portrait being the most expensive.

Andy Warhol made a few different works of art featuring the legendary Elvis Presley, however it is the “Triple Elvis” that is the most rare and valuable out of all of them. The images of Elvis are quite large and come in at around 7 feet tall. Elvis is pictured in black and white, while striking a pose as he points a pistol. Wharol used a single screen when making this work of art, and pressed the image of Elvis three times. There is actually a high level of detail in this printing, believe it or not, that can be seen up close. Warhol was very much known for repeating images multiple times in his various pieces of work, like his famous printing of Marilyn Monroe. The “Triple Elvis” was sold after an intense bidding war for $81.9 million dollars. That was not the only piece from Andy Warhol that was sold at this auction. Additionally a printing of Marlon Brando, featuring Marlon Brando four times on his motorcycle sold for $69.6 million dollars. It’s crazy to think that some art can fetch this much money, and that there are people out there who can afford to drop this kind of money on art. Regardless I am sure they are happy, as purchases like these are typically financial investments as they only become more valuable.