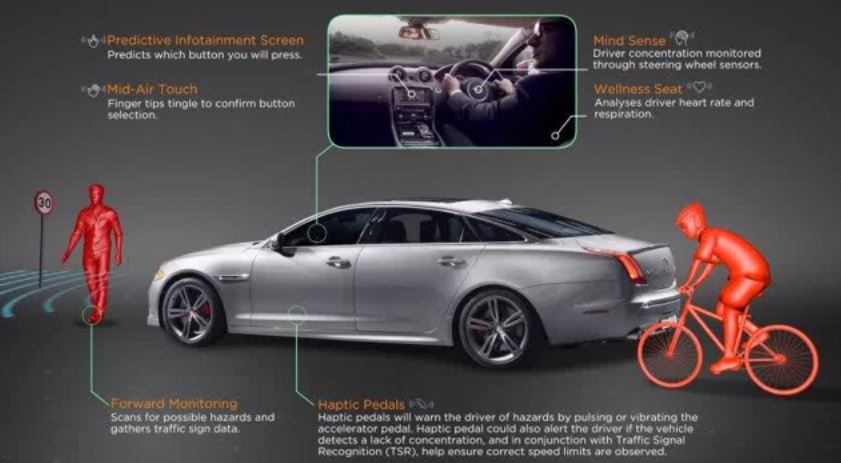 Technology is always rapidly advancing, especially when it comes to cars, but the Jaguar Land Rover may soon have the coolest new feature we’ve ever seen. Jaguar has started a new project called “Mind Sense” that will be able to measure brainwaves to monitor driver concentration in the car.

In a recent press release regarding the Land Rover, Jaguar has stated that the basis of the Mind Sense research is to see if a car could effectively read the brainwaves that indicate a driver is beginning to daydream, or feeling sleepy, whilst driving. The human brain continually generates four or more distinct brainwaves at different frequencies, and by continually monitoring which type of brainwave is dominant, an on-board computer could potentially assess whether state the driver is in, whether or he or she is truly focused, or distracted in some way, such as being sleepy or daydreaming.

“If brain activity indicates a daydream or poor concentration, then the steering wheel or pedals could vibrate to raise the driver’s awareness and re-engage them with driving,” said Dr. Wolfgang Epple, Jaguar Land Rover Director of Research and Technology. “If Mind Sense does not detect a surge in brain activity following the car displaying a warning icon or sound, then it could display it again, or communicate with the driver in a different way, to ensure the driver is made aware of a potential hazard.”

While a sensor headband is currently the most typical way to monitor brainwaves, that would simply not work in a vehicle, which is why Jaguar is looking into a different type of method that is already being utilized by NASA and the U.S. bobsleigh team to “enhance concentration and focus.”

So how exactly does this method work? As show in the photo above, sensors embedded in the steering wheel would be able to detect brainwaves through the driver’s hands, thus not having alter or modify anything about a person’s normal driving experience. According to Jaguar, “because the sensing is taking place further away from the driver’s head, software is used to amplify the signal and filter out the pure brainwave from any background ‘noise.'”

This idea is presently being tested by Jaguar right now, with the company conducting trials to gather information about how exactly this new technology could work. Additionally, the results of these trials will be examined and verified by “leading neuroscientists.”

For a better idea about all of the future developments that Jaguar is attempting to make real, check out the video below.