Yesterday my season tickets arrived from the New England Patriots for the 2017 season. It’s clear that a lot of thought went into this year’s packaging as previous years came in a flimsy throw away box. Not this year my friends. This year season tickets box is a keeper and everything about it reminds you that the Patriots are 5X Super Bowl champions and they are dedicated they’re ready for another one. Check out the pictures below… 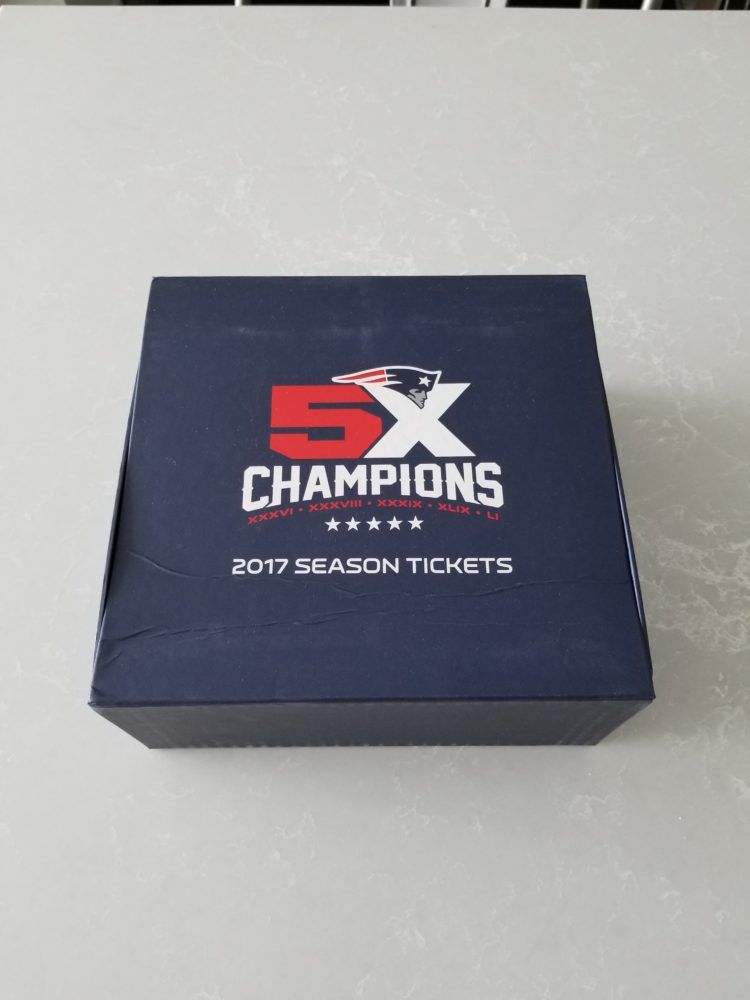 The top of the box hits you right off the bat with a reminder that the Patriots are 5X Champions. Literally stating it, the Super Bowls they won, and using five stars above the season ticket year. 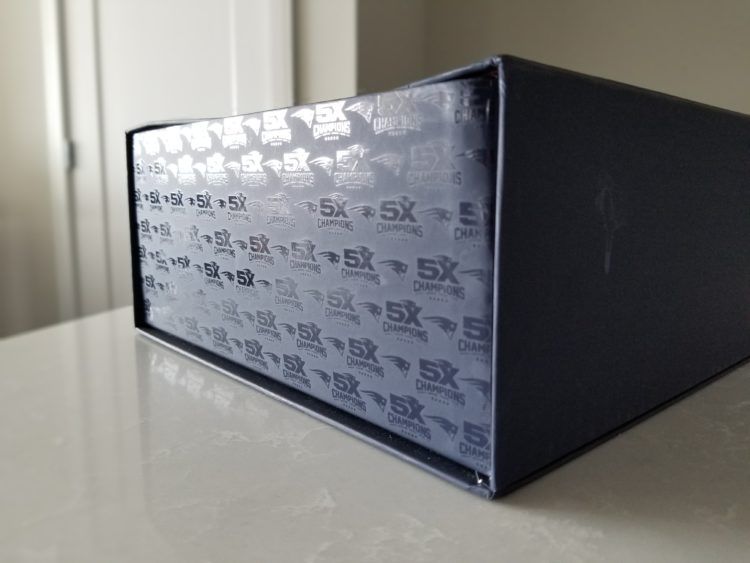 Side of the Box

The side of the box is embossed with 5X Champions, the Patriots logo, and the Super Bowl victories. 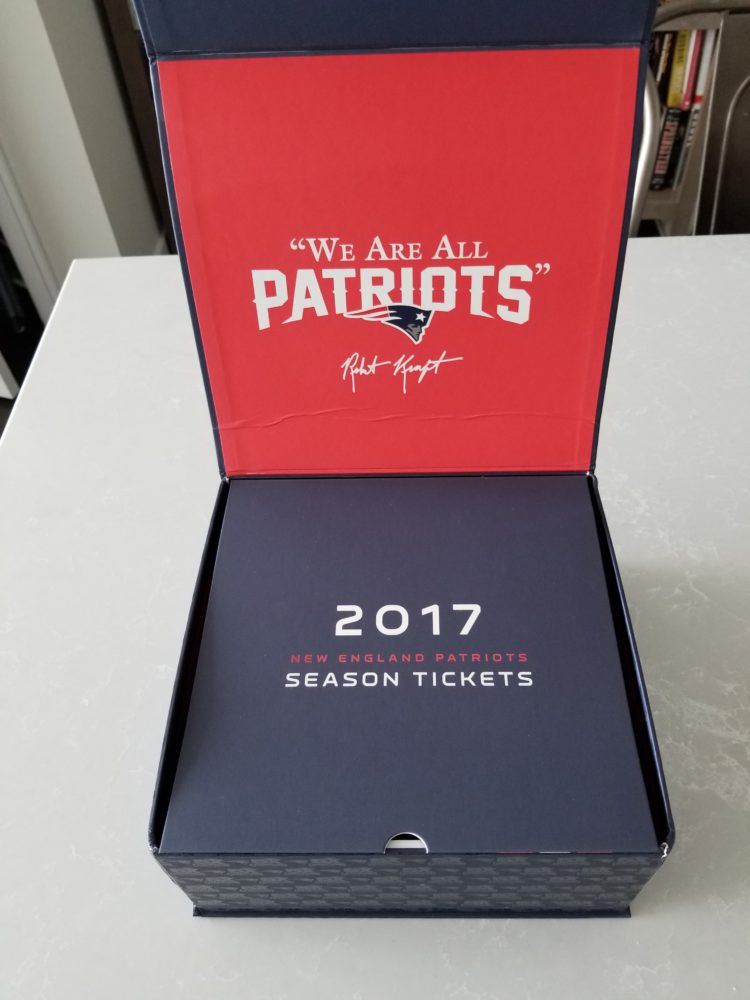 We Are All Patriots

A nice reminder from Mr. Kraft that “We Are All Patriots” on the inside of the box top. 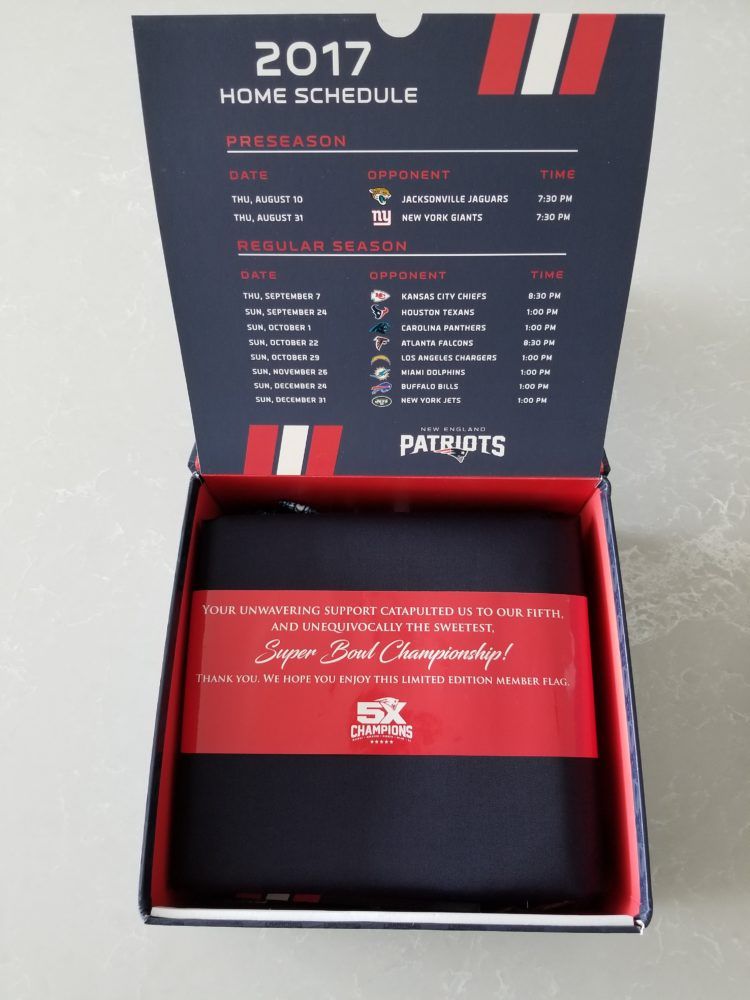 Before getting to the ticket package, there’s another flap which on the bottom of it has the home schedule. Opening night for the banner drop is September 7th against the Kansas City Chiefs at 8:30. 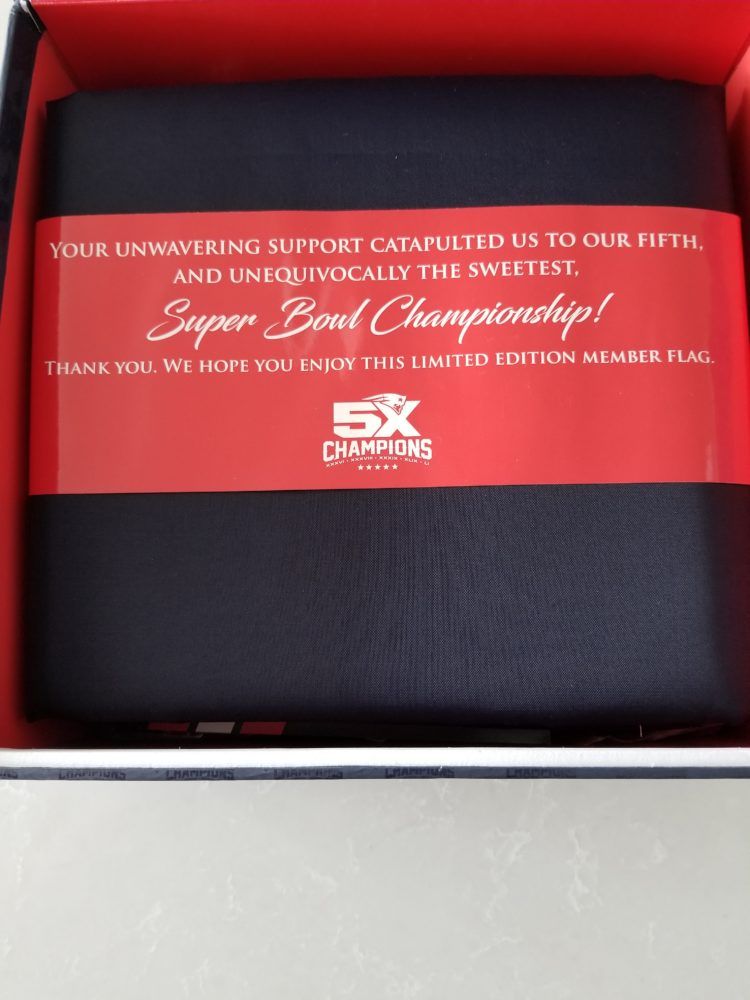 “Your unwavering support catapulted us to our fifth, and unequivocally the sweetest Super Bowl Championship! Thank you. We hope you enjoy this limited edition member flag. 5X Champions.”

After the previous Super Bowl win, the Patriots had a season ticket member limited edition shirt that you could purchase. This time they went the extra mile and instead issued a limited edition season ticket member flag at no cost. Also, take a look at the edge of the box and you can see “champions” embossed on the edge of the box. I’m not exaggerating when I say that there’s a lot of detail that went into this. 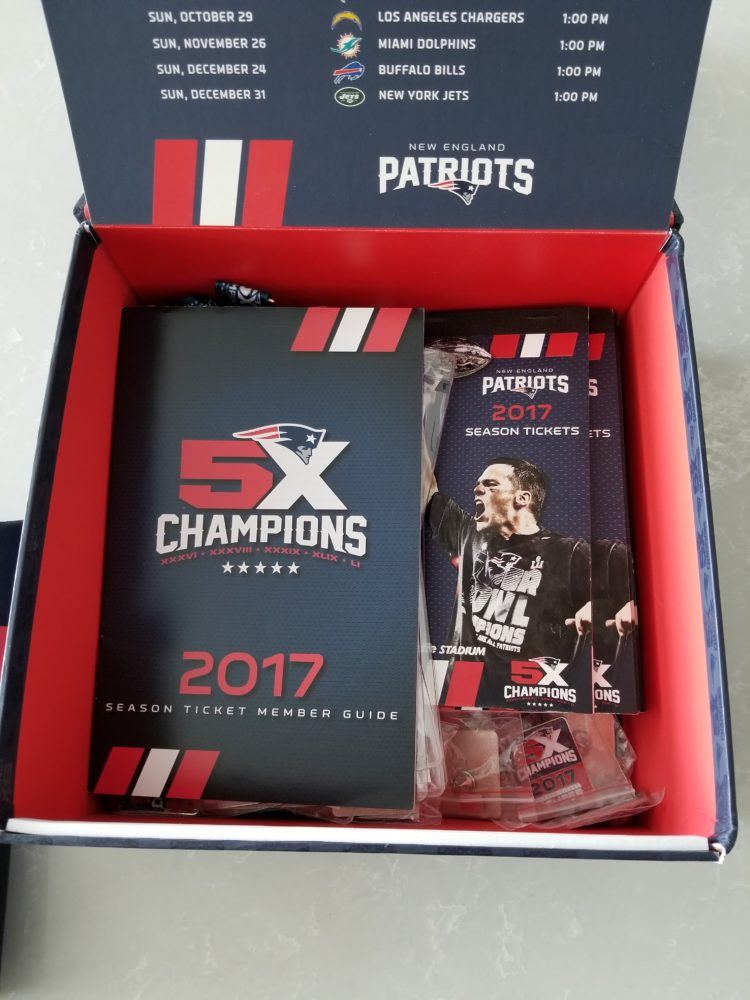 The 2017 Season Ticket Member guide. I’ll save this for some poolside reading. 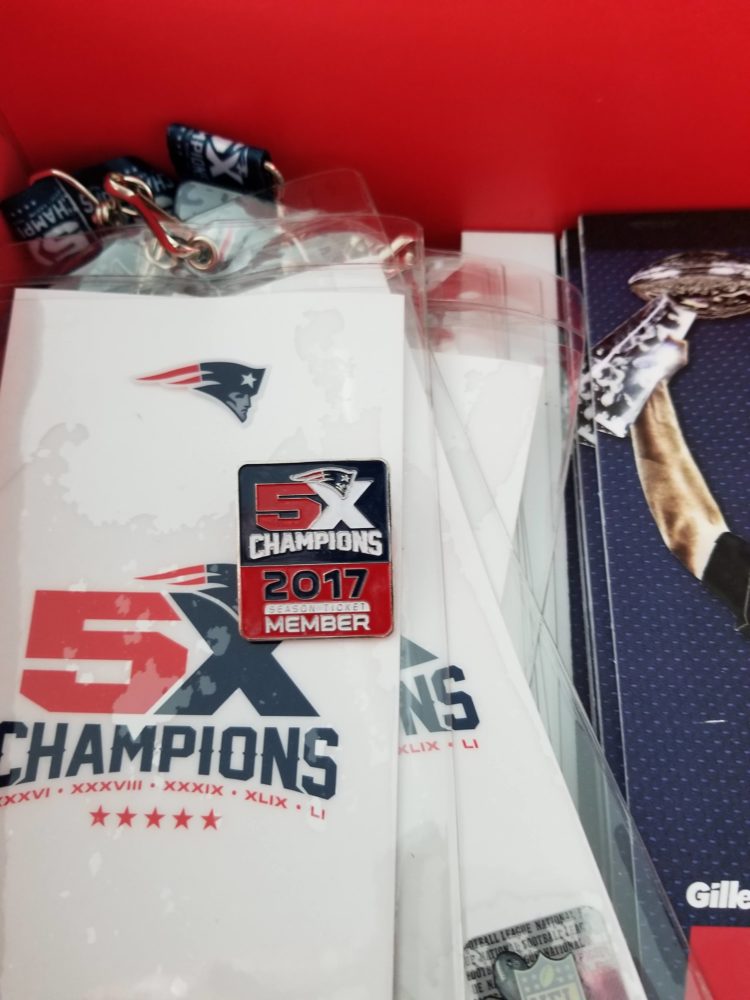 No surprise here as the lanyard has 5X Champions all over it. 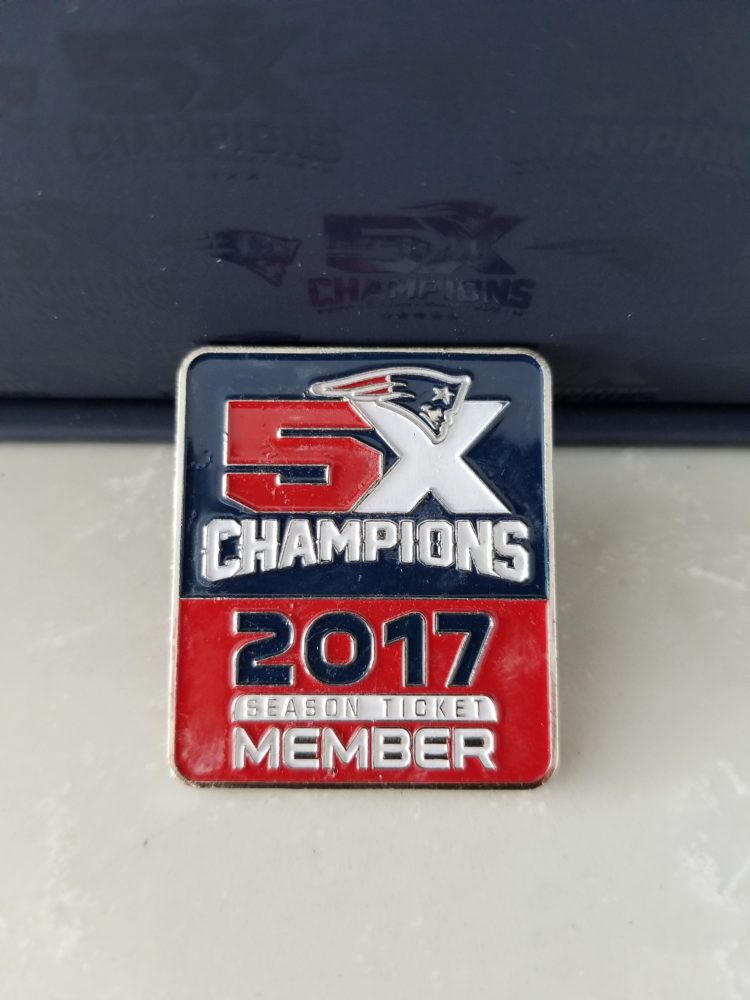 A close up of the season ticket member pin.

Expect to see a lot of these on opening night, not only in the parking lot but inside of Gillette Stadium. 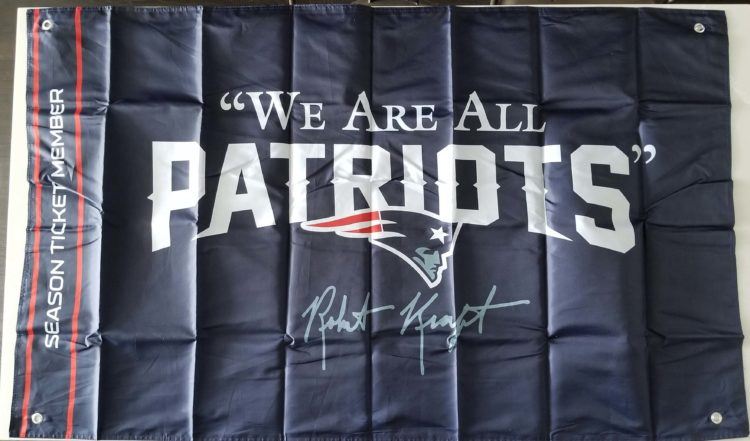 Reverse Side With Mr. Kraft’s Quote

A nice touch with this being a reversible flag.