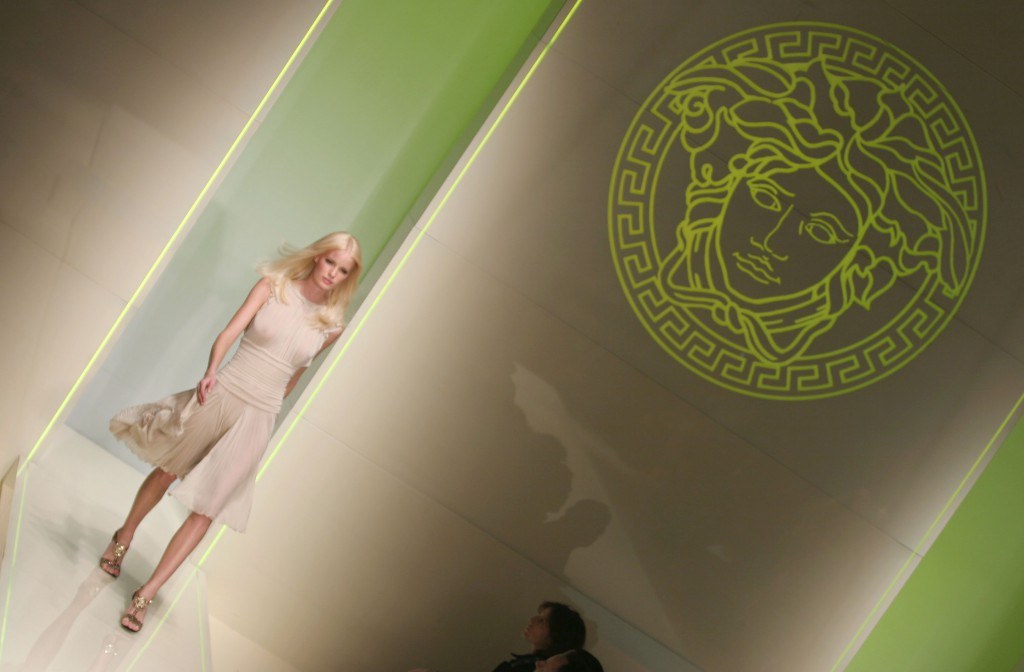 Gianni Versace S.p.A., usually referred to as simply Versace, is an Italian fashion company and trade name founded by Italian fashion designer Gianni Versace in 1978, when the first Versace boutique was opened in Milan’s Via della Spiga. In 1994, the brand gained widespread international coverage in relation to the black Versace dress worn by Elizabeth Hurley–referred to at the time as “That Dress”–which is said to perhaps be Versace’s best-known creation. Six years later, the green Versace dress worn by Jennifer Lopez to the 42nd Annual Grammy Awards also gained a slew of media attention and was voted the fifth most iconic dress of all-time in a 2008 Daily Telegraph poll. Following the murder of Gianni Versace in 1997 at the age of 50, his sister Donatella Versace, formerly vice president, took over as creative director, while his older brother Santo Versace became CEO. In February of this year, The Blackstone Group purchased a 20 percent stake in the company for more than $261 million. Headquartered in Milan, Italy, Versace–which has more than 80 boutiques operating worldwide–reported a revenue of more than $596 million last year. The international fashion house produces clothing, accessories, fragrances, cosmetics, home furnishings, and jewelry. Read on for a list of the most expensive Versace rings on the market today.

Tied for the low spot on the most expensive Versace rings list, the men’s Barocco Ring and Round Barocco Ring are both runway fashion show items from Versace with a price tag of $475. Both the eye-catching Barocco Ring the Round Barocco Ring “is finely crafted in gold-tone metal and black resin” with the Medusa emblem in its center. Each ring is a “statement piece of jewlry that can be added to any look.”

The Versace Star Greca Medusa Ring is the fourth most expensive Versace ring available on the market today with a price tag of $495. “This beautiful golden ring effortlessly enhances your trendsetting look. Exquisitely styled, this instant status symbol bears Versace’s quintessential emblem. This luxurious, timeless classic is an instant boost to your wardrobe.” The Versace ring is available in six sizes.

“Experience the height of dramatic elegance” with the $525 Versace All Over Bling Ring. The luxury gold-tone metallic ring is accented with a number of dazzling miniature crystals and features the signature Versace Medusa logo at its center. Available in six sizes, the “stunning showstopper” will help you “effortlessly enhance your fashion statement while creating your own signature look.”

Versace’s Greek Line Enamel Ring is the second most expensive ring available from Versace right now. This elegant piece of jewelry, with a price tag of $575, “is a nice and simple way to incorporate a bit of Versace’s aesthetic to your daily look.” The bold signet ring features the iconic signature Medusa logo at its center and black enamel and gold contrasts to create a classic Greek inspired motif.

The most expensive Versace ring on the market today is the women’s Strong Wrap Medusa Paved Ring with a price tag of $875. The Medusa ring is a gold-tone metallic ring featuring the iconic Versace Medusa logo paved with glittering Swarovski rhinestones. Versace’s “strongest design… lends a luxurious appeal to everyday outfits and gives an elegant lift to your favorite cocktail dress.”