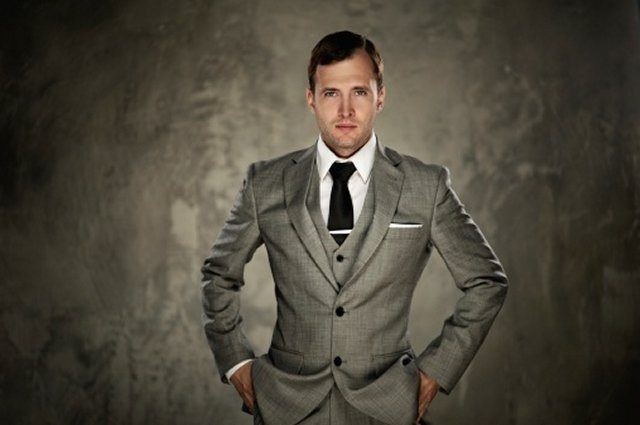 It is known, and something that is made a joke of, that women worry about issues such as a woman wearing the same suit to the office, fear seeing the same dress at a party and generally wish to outdo each other in the fashion stakes. Men are not as well-known for this problem. A suit is just a suit, right? Wrong! There are men out there who are just as keen as women to be competitive in the fashion stakes and are as keen to pay the cash to achieve this. Yet, what are they willing to pay? Let’s take a look at the fifteen most expensive suits……

Top of the list is a suit designed by Stuart Hughes in Manchester, England. It is made from dark fabric consisting of cashmere, wool and silk. The suit is adorned with 480 0.5 carat, color G, vs2 quality diamonds.

Containing over 5,000 stitches, it is believed that this suit took over 80 hours to complete. It is made from an unusual fabric combining the wool of vicuna and qiviuk.

This fine suit is created by Dormeuil, a UK company who supply the most luxurious and finest fabrics across the world. This suit is made from six different luxury fabrics.

This is certainly not a suit you would expect to see someone wearing in the office. This unusual suit features horizontal stripes, a long jacket and baggy trousers. It sold for $78,000 at the Augusta Auctions, NYC, in 2011.

This suit is designed by William Wetmancott, a man of just 27 years of age. It is made from some of the most lavish fabrics available, hence the price tag of $75,000.

Antonio Carola and Ciro Parone established Kiton in 1956. They specialize in creating tailor-made tuxedos and suits. Although the K-50 is worth an astronomical $50,000, made-to-measure suits from Kiton cost around $20,000 and the ready to wear range is a more affordable $8,000

Suits form this Italian fashion house generally cost between $6,500 and $47,500. However, their most expensive suit is worth $48,000. It has a pinstripe design and is made from unusual fibers, including the wool of a rare South American animal called vicuna. Adding to the value of this suit is the stitching made of white gold.

Each suit is stitched by hand by the best-known tailor in London, Desmond Merrion. Each garment he creates is unique, making the price understandable.

The use of gold and platinum thread in both the stitching and the fabric, adds an element of novelty to this suit. It was sold to a Romanian businessman.

Each year Loro Piana holds a competition to find the finest cashmere. A suit is then designed and created using the fabric produced by the winner of the competition.

These suits are not readily available so you have to order one. Each suit is individually designed and tailored by Ermenegildo Zegna.

Anyone who chooses a to buy a bespoke suit from this Manhattan showroom can expect to spend up to $20,000. As many as 200 different fabrics are included in some of Fioravanti’s suits.

Made from Mongolian merino wool and cashmere, these suits are famed for their outstanding design. Brooks Brothers are one of the best-known suit designers in the world.

Giacomo and Giovanni Canali established their company, specializing in men’s clothing, in 1934. The Brioni Group bought Canali in 1993 and they were in turn bought out by the Kering Group in 2011. They still trade across the globe and their most expensive suit is valued at $4,200.

Although this company is better known for their leather goods, a suit from Bottega Veneta is worth $3,800. They are also known for producing clothes that bear no logo and they first held a menswear fashion show in 2006. This is the most affordable of the most expensive suits.