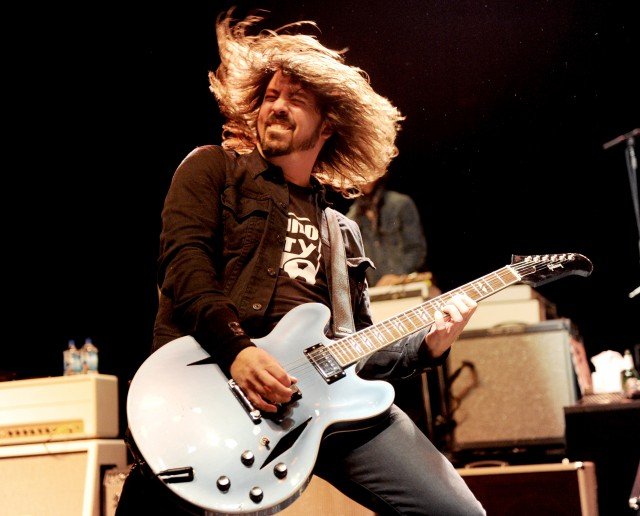 Multi-instrumentalist, singer-song writer, record producer, band leader, spokesperson, and frontman of the Foo Fighters are all but just a few words to describe Dave Grohl. Over the years Dave Grohl made his way from an obscure musician into one of the richest figures in music who has a net worth of $225 million dollars. His various bands have influenced countless musicians, they’ve toured the world many times over, and have put out some of the most important music of the last twenty years. That’s quite a lot to achieve considering that Dave Grohl dropped out oh high school. So how did he accomplish all of this? Though pure talent, determination, and hard work.

Dave Grohl was born in Warren, Ohio back in 1969. His mother was a school teacher and his father was a news writer. During his early life, his family moved around quite often. When he was seven his parents became divorced and he lived with his mother in Virginia. At an early age, Dave was always fascinated and inspired by music. He first picked up the guitar at 12 and began taking lessons. However given his eccentric personality, he dropped the lessons and began teaching himself how to play the guitar. He always loved music, however when he attended a Naked Raygun concert (a prominent punk rock band at the time) when he was thirteen, everything changed.

Punk rock has a very powerful influence on teenagers, and all Dave wanted to do was to play punk from now on. In high school he was fairly popular and was elected as the vice president of his class. He played in a variety of different bands as a guitar player, most notably his band Freak Baby. During that time, Dave decided that he wanted to play the drums as well, so he taught himself and moved over as their drummer. When he was 17, he auditioned to be the drummer of a D.C. punk band known as Scream, and he got the part. Much to his mothers chagrin, he dropped out of high school to work with the band full time, any parents nightmare. However this move would pay off. Scream was touring with the Melvins in 1990 and at one of their concerts he met Kurt Cobain and Krist Novoselic, not realizing that the forces of rock would unite the three.

During a tour in the 1990’s, Scream unexpectedly broke up, and Dave had no band. The frontman of the Melvins, Buzz Osborne, informed Dave that this band Nirvana was looking for a drummer. Dave realized that this band was comprised of his new friends, so he naturally wanted to join them. It wasn’t too long after contacting them that he became the full-time drummer for Nirvana. At the time of his arrival to Nirvana, the band already put out a fairly unknown first record. It sounded very rough, it was aggressive, but it was also very different. As a band, Kurt, Krist, and Dave began working on their follow up record, Nevermind. To much of their surprise, it turned out to be a worldwide commercial success, and Nirvana effectively pioneered the genre that is now known as grunge.

Nirvana became a massive sensation, however most of the eyes were on their frontman, Kurt Cobain. Drummers are easily the most under appreciated members of a band, as the general public typical looks at the guitarist/singer as the chief member. This didn’t bother Dave, and he continued to work with the band. They would go on to put out a third record that was also a success and hit the number one spot of the Billboard 200 charts, and Nirvana was one of the biggest rock bands in the entire world. Nirvana brought punk and grunge into the spotlight of mainstream pop-music, a feat that is rarely seen today. Their music was aggressive, emotional, and polarizing…yet people loved it. However the crippling drug use and mental state of Kurt became more and more of an issue. After canceling a tour due to Cobain’s difficult battle with drug abuse, Kurt Cobain committed suicide, shocking the entire world.

The aftermath was rough for all of the band members, and Dave became somewhat lost in life. He lost his best-friend and fellow band member and had no real direction. Since music was always therapeutic for Dave, he went into the studio to record some songs. When he was finished, he had 15 complete songs, all of which were composed by Dave; he played the guitars, bass, drums, and sung on the record. This would become the Foo Fighters first album. He eventually formed a band, this time being the guitar player and lead singer, and the Foo Fighters went on to become very successful. Today they have released eight studio albums to critical acclaim, with sales totaling over 11.1 million worldwide. Dave was already financial successful with Nirvana, however the Foo Fighters would earn him even more money and fame. Today Dave has been ushered into the Rock and Roll Hall of Fame and is arguably the most iconic figure in modern rock.

The story of Dave Grohl’s life is filled with ups and downs, however he made the most of what he had. There are many reasons as to why Dave achieved so much and why he is worth so much, but it really boils down to hard work, personal drive, and talent. Dave taught himself how to play every instrument found in a modern rock band. He worked pretty much solely on the first Foo Fighters record, and he never strived to be the best man that he could. Dave was never afraid to fail. After Nirvana, his music career could have easily ended. However he perceived and worked hard, despite great adversity. The story of Dave Grohl comes down to the fact that hard work does pay off in the end. That at having a seemingly natural disposition to be a talented musician.