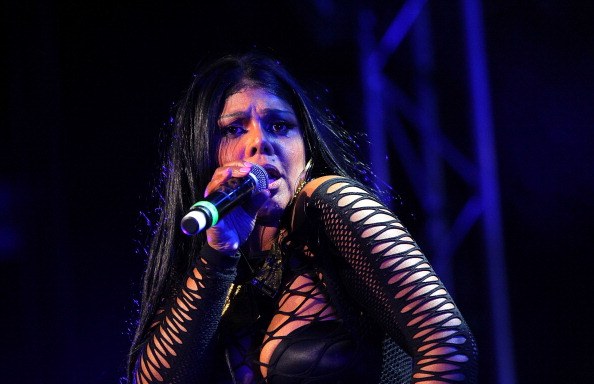 Lil Kim is an American rapper, singer, song-writer, record producer, model and actress with an estimated net worth of $180 million. Kim is most well-known for starting her career alongside the Notorious B.I.G. during the height of his popularity.

Kimberly Denise Jones was born on July 11, 1974 in Brooklyn, New York. She is the daughter of Linwood and Ruby Jones. While struggling through her childhood, Kim met Christopher Wallace, who became one of the most-famous rappers of all-time Notorious B.I.G. He included Kim in the group Junior M.A.F.I.A. which released only one album with two singles that were certified gold and platinum respectively.

Jones launched her solo career with her debut album Hard Core in 1996. The album would reach double platinum certified by the RIAA in 2001. On June 27, 2000, Kim would release her second album Notorious K.I.M. Despite limited success of the singles, Kim’s career would grow. She would appear with Christina Aguilera, Pink and Mya to release “Lady Marmalade” and she would go on to release a theme song for WWE diva Trish Stratus.

In 2003, Kim released her third studio album The Bella Mafia. She would go on to release two more albums before partaking in other activities like Dancing With the Stars and various guest appearances.

Kim has been recognized for her efforts in music. She’s not only appeared on Billboard’s top 100 chart several times, she’s received MTV Video Music Awards and a Grammy Award for Best Pop Collaboration with Vocals at the 44th Grammy Awards in 2002.

Lil Kim has various endorsement contracts including fashion brand Candie’s, Iceberg, and also cosmetic brand ICE to endorse her own line of lipsticks and glosses with Mary J. Blige. Kim also has her own line of designer watches by jeweler Jacob Arabo. While launching her own clothing line, 24/7 Goddess Collection, Kim went from being the face of Three Olives Purple Vodka to Ciroc.

The seductive hip-hop artist is also an active philanthropist. She’s raised over $4 million with Mary J. Blige for the MAC AIDS Fund. Through her foundation Kim has teamed up with apparel company Mitchell & Ness and boxer Zab Judah to donate toys to underprivileged kids in Philadelphia. In 2010, Kim launched her signature milkshake series entitled ‘Queen Bee’ at Millions of Milkshakes in Hollywood, California. All the proceeds of her milkshake will go to Wyclef Jean’s Yele Haiti Foundation. Altogether, Kim has raised over $10 million for AIDS and other charitable causes.

Lil Kim’s net worth was build upon by her music career, but really took off when she started landing large endorsement contracts and starting her own business ventures. Her music has since taken a hit in popularity, but she’s positioned herself well-enough to at the very least maintain her net worth and potentially grow it over the next several years. it’s a massive number for someone you don’t necessarily think would have such a high net worth, but assuming Kim stays out of trouble, she should in the same position next year. In Februrary, 2014 Kim announced she was pregnant. The father of her child is Mr. Papers, another hip-hop artist.