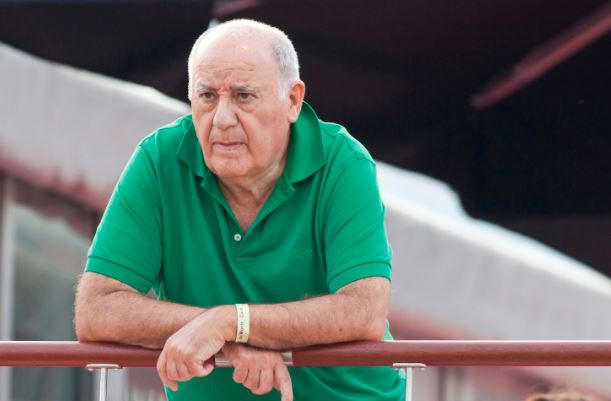 Any woman with any fashion sense knows that Amancio Ortega is the man behind Zara. Of course, no one likes the lines in Zara, but how often do you find scarves anywhere else that are as adorable as the ones here? I don’t; and I know that I’m not the only one. It’s always surprising to us when we see a man behind a huge fashion house, but men aren’t as unfashionable as we seem to believe. They are, after all, so dapper and dashing the older they get, and we know they hire bright minds to make many of their decisions in the world of fashion, so it’s not all that surprising. Amancio Ortega is a brilliant businessman, yet there is so much we don’t know about him despite his presence in so many aspects of our lives.

Amancio Ortega has an estimated net worth of $76.5 billion and it’s all from his fashion line and his business called Inditex. Who says that playing dress up and focusing too much on fashion is a bad thing? It made him billions of dollars, and that’s not exactly something to turn your nose up at.

He’s the second wealthiest man in the World

Amancio Ortega is only a few billion behind Bill Gates, Microsoft magnate and billionaire. With that much money to his name, he is pretty well-known, but certainly not anywhere as well-known as the only person in the world with more money than him. I wonder what it might be like to be the second best in this category? We imagine he wipes his tears at night with all his money because that’s what we would do.

He began working at 14

When he was just a boy living in Spain with his father, he had a to find a job to help the family make ends meet. His first job found him at a shirtmaker in Spain called Gala. This is where he learned to sew and make clothes. Amancio Ortega is the kind of man who really knows what it’s like to start from the bottom and learn every aspect of the job; we think that might be what makes him so good at what he does. He started at the bottom and worked his way to the top, and he knows every aspect of the business.

It was 1975 when Amancio Ortega opened up the very first ever Zara, and he did not want to call it that. In fact, he wanted to name the store Zorba, but the name was already being used in another business and he was forced to change it. He and his first wife were the ones who opened the business together, and they did it with great success.

He likes to stay low-key

What can we say about a man who managed to keep himself in the world of fashion and success for more than two decades without ever once being photographed and published? He managed to make it until 1999 without a phot of himself ever being published. We think it’s because he prefers to stay home, low-key and not in the spotlight. He is a man who appreciates his success, but that doesn’t mean he wants to be a famous person at all. We love that about him.

Amancio Ortega was once the wealthiest man in the world

Back in 2015 after his company went public, Amancio Ortega was the richest man in the world for a short period of time. Of course, the stock prices dropped and went back to normal and put him back in the second spot behind Bill Gates, but we think he probably doesn’t mind too much that he had to deal with that horrible moment in his life. He’s doing all right.

He’s only given three interviews

Amancio Ortega is so, so private. In the course of his life, he has only granted three interviews, and all of them have come in the new millennium. He’s not a snob, as so many people like to think that he is. In fact, he’s been said to be a pretty down-to-earth man since he is so simple, prefers to live simply and doesn’t want the spotlight on him. He simply doesn’t want to be recognized everywhere he goes. He doesn’t want to become a spectacle. He’s 79 now, and he just wants to relax and enjoy his life. We have respect for that.

We don’t know when Rosalia Mera was born, or how long she was married to Amancio Ortega. What we know is that she was the woman who helped him begin his business, and she always had a piece of that. We suspect that she and her ex had an amicable divorce, as she maintained a position with the company she helped begin. She died in 2013 when she was only 69, and she was the wealthiest woman in Spain when she passed.

His daughter Marta Ortega is married to a famous man

Amancio Ortega might not love to be in the spotlight, but his daughter definitely does. She is Marta, and she is lovely. She’s also married to one of the most famous equestrian’s in Spain. His name is Sergio Alvarez Moya, and these two find the press following them all the time. The world wants to know this family so badly.

Even though he is a man who doesn’t like to be in the spotlight, he’s not pretentious. Amancio Ortega goes to a local coffee shop on his way to work in the mornings and orders the same simple thing, and he then goes into the employee cafeteria at his business headquarters every single day. He’s a man of the people, but only his own people and his own employees; and everyone seems to really like him a lot.